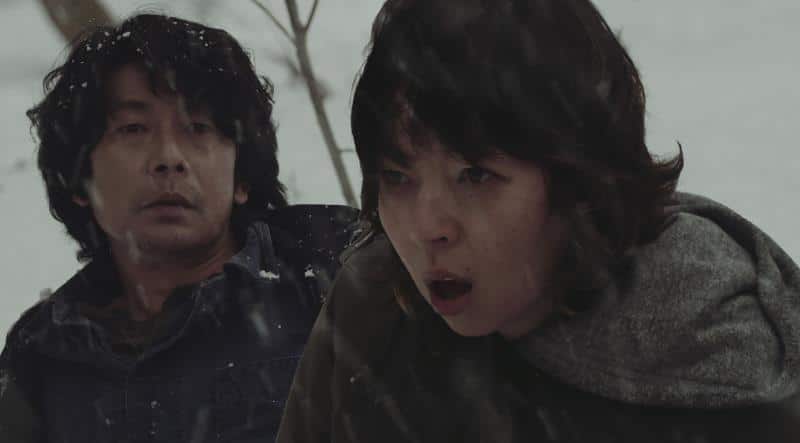 Shogo Kodachi (Arata Iura) is a reporter who travels to a remote town to investigate the circumstances of a disappearance of a young boy over thirty years ago. Although the police believe they know what happened to the boy, the woman who was arrested never admitted to his kidnapping and murder. The reporter meets with Kazuki (Masatoshi Nagase), the brother of the murdered child, whose memories of his brother’s disappearance seem to be partial and distorted. Shogo also meets with Sayuri (Nahana), the daughter of the woman accused of the kidnap and murder thirty years before.

“Red Snow” is a unique crime drama, less concerned with the details of the case than the subsequent impact such an event has on the relations of the victims and the murderer. The crime is in fact solved early on, it is clear that the boy was kidnapped and killed, but many people either refuse to admit what happened or have misremembered details about the case and their experiences. The setting, with falling snow and an iron grey sea, create a cold atmosphere that is reflected in the stony silence of those the reporter interviews. The cinematography by Futa Takagi gives the world a gritty, noir feel, with the chill of the wind and the darkening skies creating an oppressive atmosphere in which the drama unfolds. The soundtrack of natural sounds and breathy woodwind is likewise harsh and disturbing. This is the first film from writer/ director Sayaka Kai but it is an impressive debut and shows a prodigious talent for storytelling. The small cast make for a taut thriller that keeps you guessing at the exact details of the case. Many of the characters operated in a grey area of morality, their history and motives obscured, but their carefully constructed characters remain fascinating whether relatable or repulsive.

The film takes an unusual form for a crime drama, with the crime already solved before the film begins. The incredible central performances mean we are brought into the world and psychology of those who survived the horrific events of thirty years before. It is a story about the difficulty of memory and how people can supress traumatic moments from their past. Both Kazuki and Nahana are victims in their own ways and the film shows how people and society are often all to quick to forget things they would rather not remember.