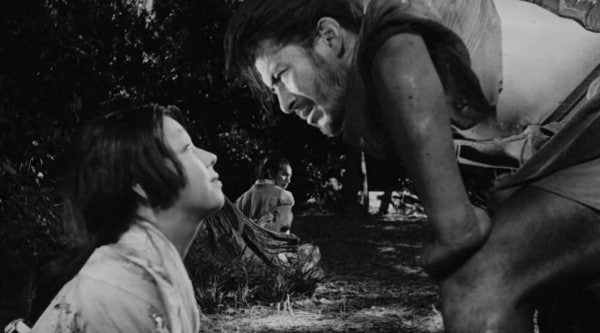 Escaping from a downpour, a commoner (Kichijiro Ueda) takes shelter at Rashomon gate, where he meets a wood-cutter (Takashi Shimura) and a priest (Minoru Chiaki) who are discussing a recent trial they have witnessed. The wood-cutter tells the man that as he was walking through the forest a few days before, he came across a dead samurai. The priest had earlier seen the samurai (Masayuki Mori) leading his wife (Machiko Kyo) on a horse in that direction. Later a thief Tajomaru (Toshiro Mifune) was caught with the weapons from the samurai. Tajomaru is taken to trial and tells his version of events, claiming that he did kill the samurai. They also hear the story of the wife of the samurai, which is different in points to that of Tajomaru. We also get two different version of events, with no hints as to which is correct, and all seeming to take the blame for the death of the samurai.

Based on a short story by Ryunosuke Akutagawa, the film has an interesting structure, one that would later influence many other works. Instead of being a straightforward narrative, we are instead presented, through flashbacks, with several versions of the same event, and asked to choose which one we believe or trust. This makes the film engaging, especially when you reach the third and fourth versions, as you attempt to puzzle out why they would be lying about certain things, whether you can trust the witnesses, and what the true circumstances of the murder were. Unlike other historical films, this is focussed heavily on the telling of stories, and dialogue between the major players, rather than action sequences. All the actors do a great job, particularly the three involved in the crime, as they act out the various interpretations of the scenes. Akira Kurosawa’s direction is fantastic, with the use of static cameras during the trial scenes putting you in the role of an unbiased judge as each story is told, and use of framing and movement in the flashback sequences showing you exactly what you need to see. Both the story and direction work together to create a compelling narrative, that keeps you wanting to learn more about what really happened.

The film asks some difficult questions about the nature of truth and reality, and also includes some very dark themes of murder and rape, although never graphic, and nasty characters. At the beginning of the film we see the crumbling Rashomon gate amidst a rainstorm, which acts as a perfect visual metaphor for the chaotic reality of life, and the forces of nature that act to destroy what civilisation attempts to construct. The lack of order symbolised by the gates destruction is explained as the characters tear firewood from the building, further emphasizing the necessary selfishness of humanity). A deserved classic, this film is a must watch for fans of cinema, as it inspired the way many future stories were told.