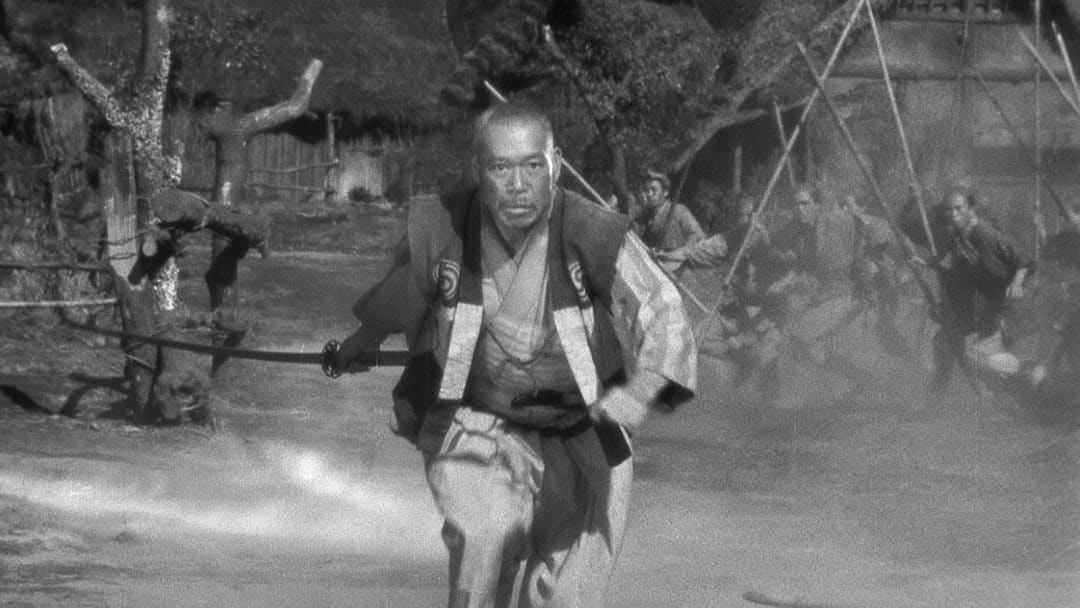 A small farming village in feudal Japan is facing starvation as their crops are being taken by bandits. They set out to look for samurai who they can hire to protect them. The first Kanbei (Takashi Shimura), recruits five more, and they are later joined by the unusual Kikuchiyo (Toshiro Mifune), a commoner who claims to be a samurai. Together they return to the village to defend it from the bandits.

The film is epic in scope with many characters and situations to explore. The plot is relatively straight-forward, but beautifully executed and, despite a long running time, it holds the viewer’s interest throughout. Akira Kurosawa’s direction is instrumental in creating a sense of momentum and the expert composition of shots would inspire filmmakers for generations to come. The music by Fumio Hayasaka is tense and dramatic and used sparingly. There are many scenes where the painting-like shots are left to be appreciated in silence. The cast all do a superb job, Toshiro Mifune again proves to be Kurosawa’s muse, having many hilarious moments in the comic role of Kikuchiyo. Takashi Shimura as the leader of the group, who must gather together this gang of seven to defend the village, also manages to carry the sense of stoic leadership and martial prowess.

Essentially an action film, “Seven Samurai” takes its time in building up the characters and the set-pieces are far from gratuitous, being carried out with real emotion. Through the film run undercurrents of philosophical and moral concepts, with the samurai code of conduct scrutinized and the struggles and fortitude of the common man praised. A film worthy of the accolades and recognition it has received.