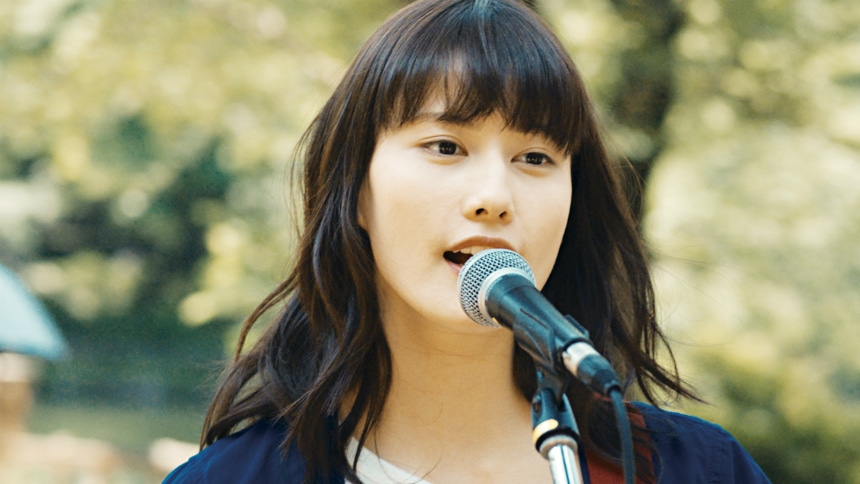 Jun (Ai Hashimoto) is struggling to come up with a thesis for the communications professor on her socio-cultural studies course. By a quirk of fate she bumps into Haru (Mei Nagano), who is searching for her grandfather’s former sweetheart from letters she discovered after her passing. The two girls set out to find this woman and soon meet her grandson, Tokio (Shota Sometani), who tells them that she has also recently passed. The three discover an old incomplete recording of a song that the old couple had written and recorded together and decide that they should write the rest of the song, which they later decide to perform at the upcoming music festival in the park.

The thin plot, languid pacing, and gentle, non-confrontational atmosphere of the film is much like spending a pleasant afternoon sitting in a park, watching the world go by. Much of the film is set in and around the park, the green space offering a soothing backdrop to the drama, along with the melodic score. While there are romantic undertones with the historic story, this tension is not there in the leads, which is refreshing to see. Instead they are just three young people enjoying youth and finding their way in the world. The film features a couple of sub-plots, one involving an elderly friend of Haru’s grandmother and one relating to Jun’s past as a child star, that are underused. Instead the plot is centred on the three young adults and their quest to rediscover the past and understand the relationship of Haru’s grandfather and his former girlfriend through the fragments that are left. All three leads are supremely likeable and play well off one another. Shota Sometani delivers a comic performance as the energetic, nerdy Tokio; Ai Hashimoto and Mei Nagano have good chemistry as the new friends, balancing a wistful melancholy about the passage of time and the joyful experiences of youth.

“Parks” was commissioned as a celebration of the 100 year anniversary of Inokashira Park and the film’s themes of conservation and time emphasise a feeling of respect towards the place. It perfectly captures the atmosphere of parks as multi-generational spaces, brimming over with memories and individual stories. The trees and waters of the park offer comfort in giving people a sense of perspective. The film portrays this sense of living both with and apart from the past by having Haru step into her grandfather’s story in several moments of magical realism. “Parks” is an experiential film that hits all the right notes and captures the emotive, transcendent atmosphere of these spaces. The themes of reconnecting with the past, the power of music, the passage of time and finding peace and purpose, are all beautifully articulated. A relaxing watch with great performances from the leads and a calming, contemplative atmosphere.