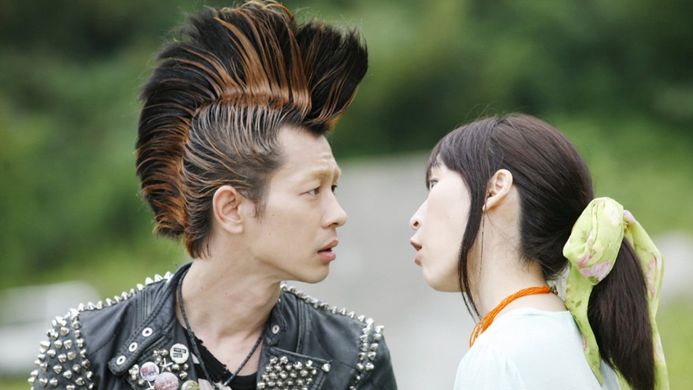 In a frenetic opening monologue, Haname Jinchoge (Kumiko Aso) introduces us to her life and philosophies. She goes through her daily routine as a chore, enjoys a sludge of ten spoons of coffee in milk each morning, and lives with her mother (Keiko Matsuzaka), her father has left for a more wealthy woman. Haname loses her job at failing women’s magazine publication and her mother takes ill resulting in a coma. They manage to fish a letter out of a sunken post-box that tells Haname that her real father is not who she thought, but is instead a bohemian figure called Light Bulb (Morio Kazama), who is now running a bric-a-brac store. The eternally upbeat Haname sets out to meet him, hoping that her discovery of her mother’s former partner might return her to consciousness.

“Instant Swamp” has a bizarre and convoluted plot that is perfectly in keeping with its protagonist and her eccentric behaviour. The film is an off-beat comedy that relies heavily on slapstick humour and unusual scenarios. It often delights in subverting expectations with ridiculous reveals. Much of the dialogue is clearly designed more for laughs than realism and it plays like a series of sketches that happen to involve the same characters. Not all of the jokes work, but there are enough of them that this does not matter. In the same way, the plot moves along at such a pace that there is always something else to be invested in, albeit temporarily, like a wild treasure hunt that is constantly throwing up more hints to follow. The jokes are helped, even when the material is weak, by some great comedic performances. Kumiko Aso is very charismatic in the lead role and really sells every gag. Morio Kazama as Light Bulb gives a good performance as the humorous yet untrustworthy shop owner. The supporting actors, Eri Fuse as Haname’s co-worker Ichinose, and Ryo Kase as a punk electrician named Gas, are also excellent in their roles. The film is written and directed by Satoshi Miki, whose fertile imagination shows in every scene.

“Instant Swamp” is a peculiar film about the magic of everyday life. In an early scene, Haname’s mother tells her there is a kappa in the garden. Haname refuses to be drawn in, believing this to be a silly delusion. Similarly, when she is tasked with writing an article on ghosts for her magazine she is highly sceptical, despite her co-workers’ belief in the supernatural. However, by the end of the scene Haname has experienced her own transcendental moment of magic, finally converted to the idea that the world is a wide and wonderful place where anything can happen. The film is not attempting to suggest scepticism is wrong, but that most people spend their lives in narrow channels and often miss out on the opportunities that may be surrounding them for experiencing “magic”. This idea is also emphasised in the use of antiques dealing as a central plot point. Haname’s meeting with Light Bulb proves to be important as she learns that the value of an object is not necessarily in its price, but in its emotional weight. She learns to value things based not solely on their use. Again, this is shown in her own attachment to a bent nail, the importance of which is lost on almost everyone she shows it to. The theme of luck plays throughout the film in parallel with this idea. Haname believes that throwing away a lucky black cat statue in her youth has led to her streak of misfortune. However, when she is tricked into buying something that is seemingly useless at the end of the film, she has grown enough to appreciate the potential in even the lowliest of things. Life, she realises, is not based on luck, but instead on making the most of what you have and in seeing opportunity in every new day.