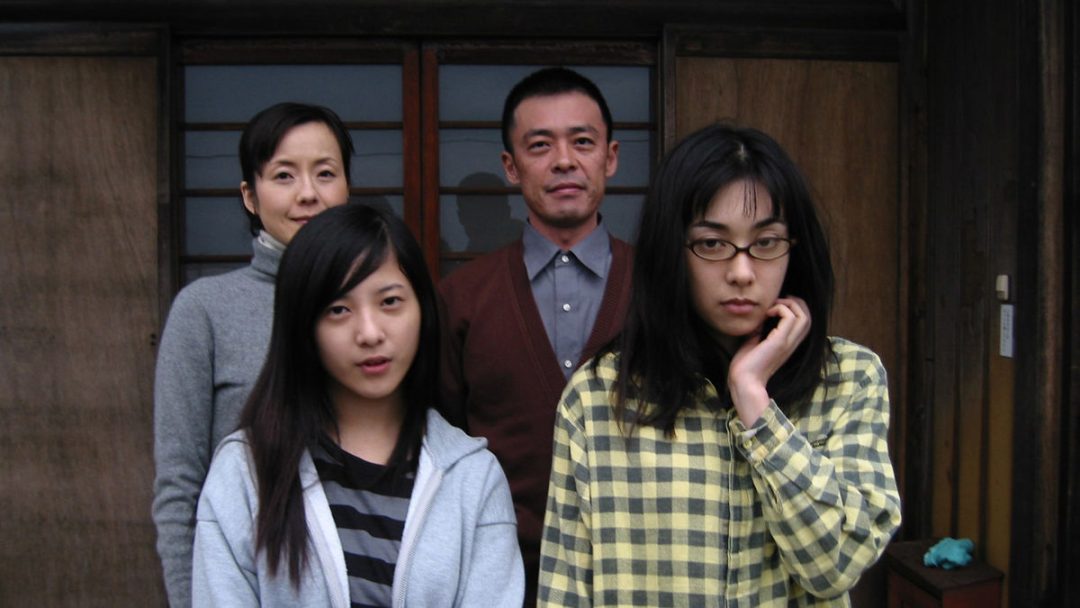 17-year old Noriko Shimabara (Kazue Fukiishi) lives at home with her father Tetsuzo (Ken Mitsuishi), her mother Taeko (Sanae Miyata), and her younger sister, Yuka (Yuriko Yoshitaka). Bored of life in their rural hometown of Tokoyama, Noriko leaves travels to Tokyo to meet another young woman she met online. This woman is Kumiko (Tsugumi), who runs a “family rental” business, where people who have lost loved ones can hire them to act as their family on a short or long term basis. Noriko is followed by her younger sister Yuka, both of them taking on aliases, Mitsuko and Yoko. After the death of his wife, their father, Tetsuzo, begins to investigate their whereabouts, at first believing this to be connected to the mysterious “Suicide Club” cult that is growing in notoriety following the mass suicide of a group of schoolgirls at Shinjuku Station.

Written and directed by Sion Sono, this film takes place in the same timeframe as his earlier film “Suicide Club”, and is linked tangentially through subtle nods and more explicit references. While there is some overlap in the themes of the two films, “Noriko’s Dinner Table” is vastly different in tone. The film is divided in to chapters, each giving a perspective of a different character, and there are long stretches of narration further heightening the novelistic style. This helps keep the film feeling fresh over a two and a half hour runtime, as we switch back and forth between different characters, their actions and thoughts. Tomoki Hasegawa again provides a score that is melodic and contemplative. At heart the film is a coming-of-age story, about a young woman striving for her freedom and a sense of individuality and personality. Kazue Fukishii gives an outstanding performance in role of Noriko, feeling trapped by her small home town and discovering her confidence in the persona of Mitsuko. Tsugumi’s Kumiko is a disturbing example of a woman entirely detached from those around her, lacking any human connection. Ken Mitsushi’s Tetsuzo has perhaps the most upsetting chapter (in a strong field), as a father who has lost both his daughters and his wife through his obliviousness to their needs and feelings. His work as a reporter is a cruel irony as he struggles to uncover the reason behind his children’s disappearances, apparently unaware of what is happening to his family.

“Noriko’s Dinner Table” is a film about finding your identity and learning how to relate to others, with the unusual “family rental” company being a great way to explore this. It allows for a discussion of family relations as a form of acting, or as something transactional. This alienation from the direct family, with characters only playing the part of daughters or wives, allows them to better understand what is required of them and also what their own desires are. As with “Suicide Club” there are a number of strong visual metaphors employed, such as the snapping off of a thread on a coat to symbolise a break from family control or a fresh start. Philosophical discussions about the importance of  reciprocity in human relations, again abstracted to a discussion about “flowers” and vases”; about life as a circle; and about the imperfect nature of life; are handled well leaving enough nuance and subtlety for interpretation. This notion of life as an imperfect, ever changing, is what the film captures beautifully, by not attempting to give any moral message; but instead portraying a dysfunctional family and flawed characters, and asking the audience to consider human relationships in all their complexity. For all its bizarre moments and brief flashes of violence, “Noriko’s Dinner Table” is a relatable story of the timeless adolescent desire to strike out and make your own way in life, on the way discovering who you are and what is important to you.