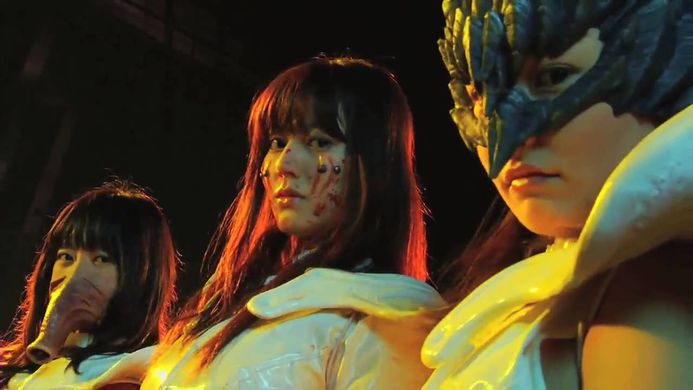 A delightfully silly slice of gory action from three masters of the genre. When Rin (Yumi Sugimoto) reaches her sixteenth birthday she is told by her father that she is a mutant. This certainly explains her feelings of isolation at her highschool and alienation from classmates. Shortly after this revelation their home is invaded by the anti-mutant police who kill Rin’s parents. Rin meets Rei (Yuko Takayama) who is part of a team of mutants fighting against the human society who are oppressing them. They are led by Kisaragi (Tak Sakaguchi), a samurai transvestite. Rin also befriends another mutant Yoshie (Suzuka Morita) and the three of them are tasked with taking down a government official opposed to mutants.

The title should give away the fact that this film does not take itself too seriously. What little plot there is acts as a slender frame on which to hang outrageous comedy-horror action sequences. Everything from the police having guns on their noses, to one girl’s power being to have two tiny arms reaching out from her ears (this is far from the most ridiculous of their abilities), will certainly appeal to anyone with a childish sense of humour and love of obscene splatter comedy. The handmade quality of the film gives it a real charm and the amount of effort that has gone into costumes, special effects (including a lot of physical effects) and gore speaks to a highly motivated and talented crew. The film is helmed by three directors, Yoshihiro Nishimura (Tokyo Gore Police), Sakaguchi (Re:Born) and Noboru Iguchi, from a script by Iguchi and Jun Tsugita. The directors clearly share a love of schlocky horror and action and their enthusiasm is infectious. The film is hyperactive and insane, feeling like a student film given a budget that allows them to bring their madcap ideas to life. All of the main actresses go all-out in their performances, embracing the wacky premise and melodrama, and do well in both comedy and action roles.

The film is essentially a bully revenge story with a well-worn message of anti-discrimination and embracing difference. It revels in weirdness and eccentricity and is a film that wants to run as far from ‘mainstream’ as it is possible to get. Only recommended for those with a black sense of humour and a love of gory violence.