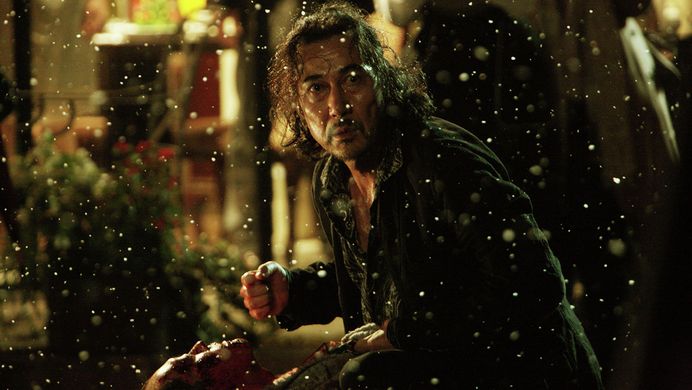 Akikazu Fujishima (Koji Yakusho) is an ex-police detective carrying a lot of psychological baggage. His estranged wife calls to tell him that their daughter Kanako (Nana Komatsu) has gone missing. He interrogates several of her former classmates and discovers that his daughter, who he has not seen for many years, is not at all the angelic figure of his imagination. Through flashbacks we are given the story of a high-school classmate of Kanako who is being bullied, played by Hiroya Shimizu. Kanako befriends him, using her influence with a powerful gang to protect him, but he is soon also to learn that she is not entirely as she seems. As Fujishima’s investigation continues he is drawn into a world of drugs, teenage prostitution, and gang violence as things threaten to spiral out of control. Far from a paragon of virtue himself, his quest comes to be an expression of his own guilt and death drive as much as a desire to find his daughter.

“The World of Kanako” is a film with two distinct flavours. One the one hand it is a look at the darker corners of the human psyche, with its damaged characters suffering from psychological issues, either natural or drug-induced, hints of alcohol abuse, drug and sexual abuse, much of which is tough to stomach (especially particular scenes of rape and torture). However, there are strong hints that this is no more than a tongue-in-cheek exploitation flick. The flashy title sequence, occasional music stings, the often casual approach to violence, are cause for confusion when set aside the seriousness of more harrowing scenes. The most positive reading of this is that it is representative of both Fujishima and Kanako’s mental state, being completely cold to what is happening, and looking on occasionally in horror, but more often in a darkly voyeuristic way. Director Tetsuya Nakashima won praise for his previous film “Confessions”, another adaptation from the novel by Kanae Minato. This film, based on the novel by Akio Fukamachi, is far more brutal than that, both in its story, and in the way it is told. Uncomfortable close-ups and high-octane editing, along with the films restless time-hopping structure, give the audience the feeling of being dragged along on this exciting yet disturbing ride. The central performance by Koji Yakusho is supremely bold and it is a testament to the strength of his portrayal of Fujishima Snr. that we are able to stay with him despite his often despicable actions. To say Fujishima fits the archetype of the tough, no nonsense cop operating outside the law really doesn’t do it justice. The film does not shy away from depicting the worst possible antihero. We increasingly come to realise that he is not imbued with any real positive traits. Nana Komatsu is great as Kanako, though we are never able to fully understand her, she again does a superb job of an antihero who seems to posses the same nihilistic spirit as her father. There are great supporting performances from a stellar cast that includes Joe Odagiri, Fumi Nikaido and Ai Hashimoto. The music is a blend of classical and electronic dance music that typifies the competing aspects of the film, on the one hand brash and offensive and on the other stylish and contemplative.

The film is a dark examination of the father-daughter relationship and deals with several issues that people may find disturbing. In some ways the cocktail of drugs, gangs, violence, paedophilia, bullying and everything else the film throws in come to represent a sort of obscene representation of the absolute worst of humanity. It is against this background that our characters are operating. They have no choice when it comes to living in this world, they can either embrace it or try to ignore it, but these things will continue happening. Kanako herself seems to harness amorality as a survival instinct, using her lack of empathy to navigate a horrific world of violence and abuse. Fujishima is very similar. He has no qualms about abusing, even raping women, and is irredeemably self-centred. The main difference is that he feels he has found a purpose. Both characters understand the world to be a meaningless place, with power the only real dynamic worth worrying about. Kanako’s notion of freedom, including the freedom to destroy others, is one that is a terrifying prospect. The film sets out to shock and it does so time and again, not only with its visuals but on the level of the ideas it presents. Highly recommended for fans of transgressive cinema that pulls no punches. A bold and brutal take on the detective genre.