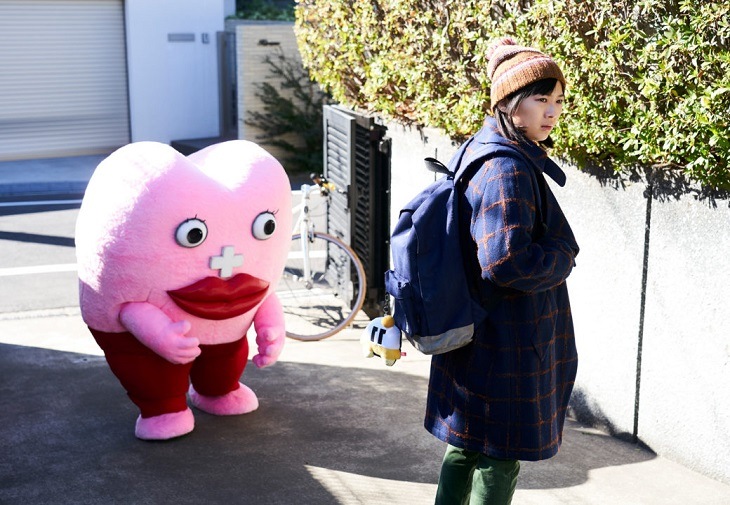 Aoko (Fumi Nikaido) works as a journalist at a lifestyle magazine. As well as her demanding job and attempting to form a relationship with her romantic partner’s teenage daughter, she also has to deal with an unwanted visitor every month. This comes in the form of a large pink fluffy mascot in red pants, representing her period. Miss Period, as she is known, repeatedly punches her hard in the stomach, and Aoko has to lug her around on her back. Miss Period also occasionally puffs out soporific vapour making Aoko drowsy. In this world, every woman is followed around by a similar mascot, some larger and some smaller, but all irritating in their own way. Yamamoto (Sairi Ito) is a cleaner at this same company, still living with her parents, with her period being just one more frustration on top of the stress of work and her lack of a boyfriend. A third plot thread revolves around Aoko’s sister Hikaru (Risaki Matsukaze), and her boyfriend, as they begin a fledgling romance. These women must attempt to remain strong and reach their goals, while this invisible burden seems determined to disrupt their lives.

Based on the manga by Ken Koyama, “Little Miss Period” addresses head on an issue that is of major importance to women, yet often goes ignored by companies and even partners. Making the period a visible, comically designed and portrayed, mascot, which appears early on like a horror movie slasher creeping up on her victims, is a brilliant touch. Externalising this issue, showing the physical exertion and determination required to cope with it, makes for an entertaining way to deal with the various problems caused by it. Both Fumi Nikaido (Fly Me to the Saitama) and Sairi Ito (Love and Other Cults) get the chance to show off their comedic talents. Both are supremely likeable in their roles. Nikaido’s Aoko is a determined career woman, who will not let anything stand in her way. Working in a difficult environment she finds she has to pretend not to be affected by her period, instead putting on a brave face in front of her co-workers. Her relationship with Karin (Toyoshima Hana), the daughter of her widowed lover, is one of the most moving parts of the film, showing her trying to do her best for this girl who is unwilling to accept a new mother. Ito’s Yamamoto on the other hand is a virtual shut-in, resentful of everyone around her and painfully shy when confronted with the chance for love. Director Shunsuke Shinada does a great job of bringing what is a weird concept to life on the screen. The design of Miss Period (Seiri-chan in Japanese) is bizarre, and could so easily have derailed the narrative, but all the actors do such a tremendous job of acting alongside it that it becomes just another character in the drama. The film goes heavy on the comedy of what is happening, deflating the taboo around menstruation, cramps, nausea, drowsiness and other symptoms, with gentle humour. Also, the oblivious male characters who continue on as normal despite the women being weighed down or distracted by this, offers relatable humour for the male audience. The men in the film are also troubled by their own unwanted anxieties, in the form of Mr. Sex Drive (who appears spouting lewd pornographic phrases) and Little Boy Virgin (a cherubic figure representative of their lack of sexual maturity). The film’s surrealist, farcical comedy sits evenly alongside moments that are full of heart and genuinely moving.

While “Little Miss Period” is on one level a knockabout comedy, it also shines a light on an often taboo subject. Women still suffer discrimination in the workplace due to a lack of understanding and compassion on this issue. If the film gets people talking about this and understanding what could be done to alleviate some of the problems associated with it, then it will have performed a great service. Despite the message, the film is never po-faced, relying on humour to get its points across. As a film it is hugely entertaining, relying on physical gags and some excellent performances from the leads to develop believable characters and relatable comedy.