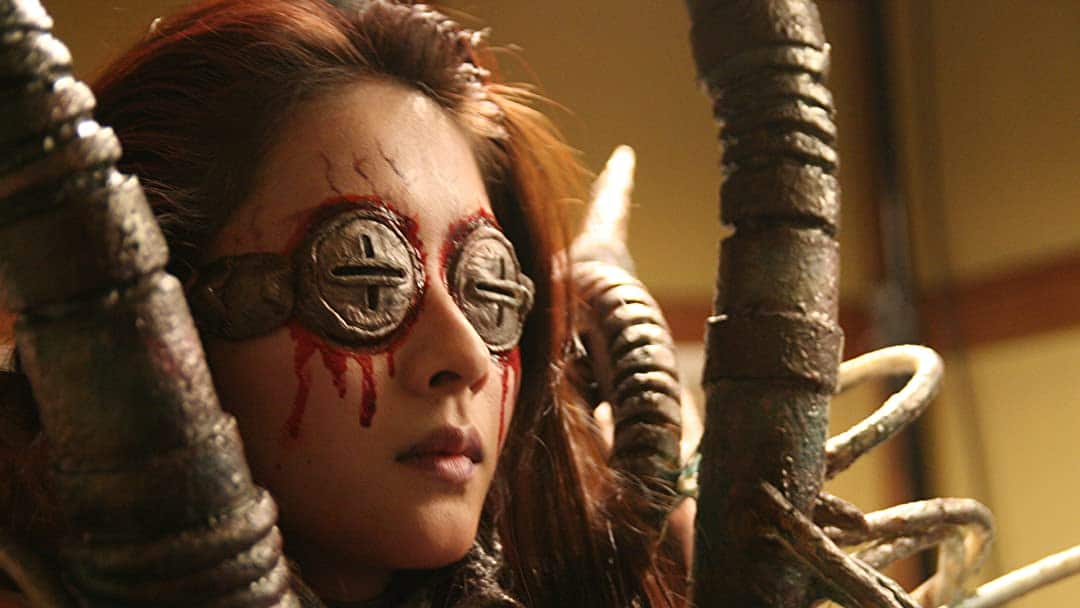 Yoji Muranishi (Issei Takahashi) works as a machinist in a factory. Cutting something of a lonely figure, he spends his lunchbreak looking over the fence from the factor at a woman, Sachiko (Aoba Kawai), who lives next to the factory, and spends time with his friend Doi. Something strange is going on in the city, with a mysterious creature appearing from the river and killing a young boy before transforming him into a grotesque conglomeration of metal, flesh and tentacles. A parasitical alien is taking over humans and turning them into necroborgs, forcing them to fight, with the victor devouring the weaker combatants. When Muranishi stumbles across Sachiko being sexually assaulted by his boss he steps in to help and the two head back to his house. Sachiko is taken over by one of the aliens and becomes a mass of metal. Muranishi is told by a man familiar with these beings that his best hope of saving her is to kill her. Muranishi heads out to attempt to rescue the woman he loves while escaping the same fate himself.

Directed by Yudai Yamaguchi and Junichi Yamamoto “Meatball Machine” is a splatter horror comedy that revels in disgusting and extreme imagery. The special effects work by Yoshihiro Nishimura is incredible and there are some truly stomach-churning creations. In particular the design of the creatures that infest the humans will thrill anyone who is into body-horror, somewhere between a tumour and hideous embryonic predator. Despite having no identifiable human features, these beings are completely understandable. One of the film’s strengths is that the explanations for what is happening are largely left unsaid until later in the movie, yet from the first instance of a human being taken over, and the sight of this small parasitical entity, it is entirely clear.

The plot is almost a twisted love story buried beneath a flood of science-fiction and horror elements. The central thread is Muranishi’s quest for Sachiko, but it proves to be a thin line on which to hang the talents and creativity of the special effects department. The directors show a firm knowledge of horror and do a great job at creating atmosphere, with off-kilter camera angles and strobe lighting effects. The majority of the film is shot in a muddy half-light, with the greys and browns of the industrial district emphasising a feel of decay, both economic and social. It doesn’t shy away from showing the uglier side of the city, with trash, weeds, iron railings and unappealing architecture.

It seems like the kind of film that the filmmakers had a lot of fun making and there are many moments that will raise a smile despite the horrific imagery. These include one of the necroborgs having a windscreen wiper to clear off blood after he has savagely dispatched a rival; and even the parasitical creatures in their fleshy command-stations have a definite comedic tone once the initial revulsion has passed. Worth a watch for fans of the bizarre and grotesque, “Meatball Machine” hangs by the slenderest of plot threads but fills its runtime with creative and excessive moments.