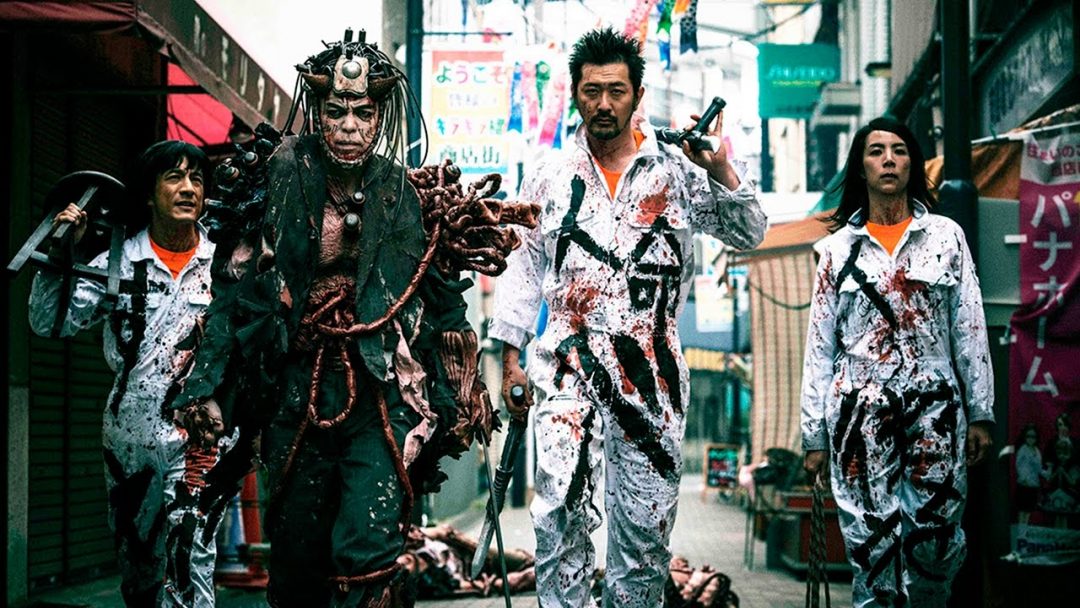 A sequel/remake to 1999’s “Meatball Machine”, for which Yoshihiro Nishimura provided the special effects, this film sees him take full creative control, both writing and directing. Nishimura is known for his outrageous splatter horror and black comedy with a filmography including “Tokyo Gore Police” and “Vampire Girl vs. Frankenstein Girl”. For those who have seen those other works, the first thirty minutes of “Meatball Machine Kodoku” might be something of a shock. It starts pretty simply and could almost be mistaken for a regular drama. Our protagonist, 50-year old Yuji Noda (Yoji Tanaka) works for a debt collection agency, spending his days attempting to extract money for late bill payments and getting nothing but disrespect and slammed doors for his troubles. His boss is less than sympathetic, shouting at the downtrodden Noda. His only respite is a visit to a second-hand bookstore and the lovely Kaoru who works there. Worse is to come for Noda as he discovers that he has cancer. After Kaoru takes him along to a meeting of a bizarre religion, Noda runs away and finds himself enticed into a burlesque club, where he is later ripped off by the staff and thrown out in the street. It may seem as though this is more than enough plot for any movie, but this turns out to be merely preamble. Throughout this a mysterious woman, with white hair and a PVC coat and top hat is wandering around the city. We discover she has in fact been drawing a giant circle that surrounds central Tokyo. A large glass descends on the city trapping a portion of the citizens inside. This is the first look we get at Nishimura’s trademark gore and black humour, as a man urinating in the street has his penis severed, and another couple engaging in a little al fresco sex are cut in half, their lower halves spurting blood while they continue to go at it. And… roll titles. Things are about to get messy.

From this point forward the central plot really kicks into gear. Noda is trapped inside the glass jar with a race of parasitic aliens who are able to take over people’s brains turning them into a conglomeration of machine and flesh and causing carnage wherever they go. Noda has to escape and find Kaoru. Along the way he is helped by a group of martial artists and we see people who he knew before the event transformed into horrifyingly deformed beings, with grotesque outgrowths of organs and mechanical appendages. The film features utterly horrific imagery, but throughout it all there is a twisted sense of fun as the violence is so extreme that it tips into comedy. It is certainly not a film for the squeamish as we see eyeballs drilled into, intestines ripped out and gallons of blood sloshing around. However, fans of Nishimura’s work will find a lot to enjoy in the inventive, over-the-top action sequences and no-holds-barred gruesomeness. It is a genre Nishimura has worked in for a long while and it shows. He has perfected many of the special effects techniques and this stands as perhaps the finest example of his work. There is a clear line from this to Shinya Tsukamoto’s “Tetsuo” in the transformed human-machine hybrids, and late in the film there seems to be a direct homage in a sequence in which we see a character running down the street.

The direction is good with lots of hand-held camera work giving a chaotic sense to the action. There are lots of subtle moments, call-backs and visual gags in the film too for those paying attention.

The central premise of the film comes at the end when we discover the reason for the alien invasion and all the mayhem that has ensued. Right before the film ends we also see some brief flashes of documentary footage, animals in slaughterhouses and battery-farmed eggs, alongside pictures of large congregations of people in city streets. It finishes with the single ironic word “humans”. However horrific things are in the film, it seems to say, humans are responsible for killing, slaughter and devastation on a far bigger scale. This is fiction, the fantastical nature of death and gore and violence here is as nothing to the true horror of humanities own destructive urges. Fans of Nishimura are sure to love this film as it is everything you could hope for from a splatter horror comedy.