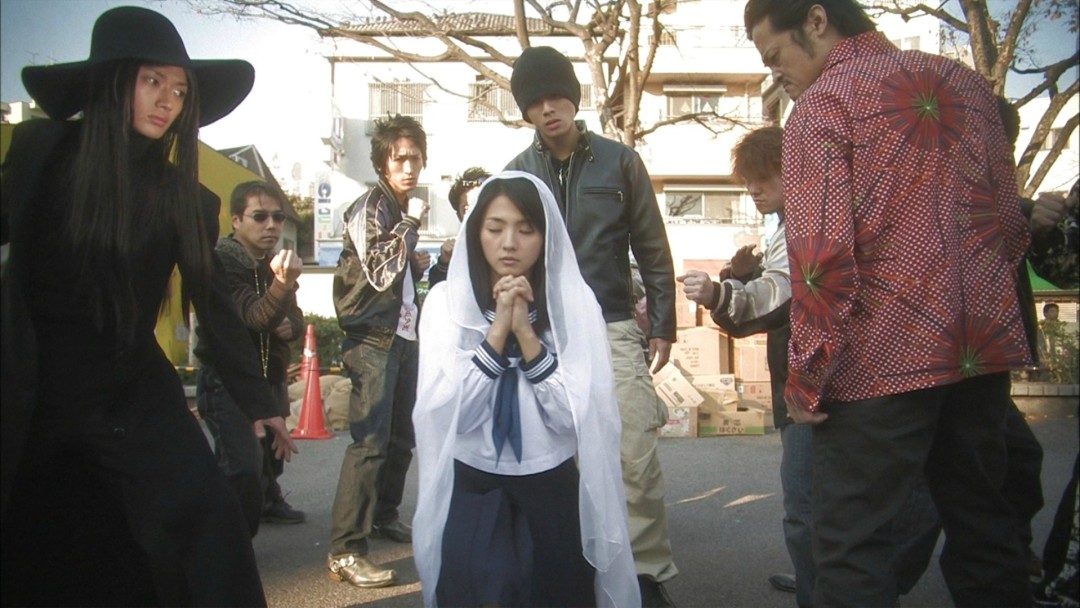 Yu Honda (Takahiro Nishijima) leads a life is one steeped in Christian tradition. Following the death of his mother, a devoutly religious woman, he lives together with his father who turns to the priesthood to deal with his grief. However, his father’s increasingly stringent demands for his son to confess his sins soon leads Yu into the gang lifestyle in order to find something worthy of confession. Yu meets up with a group of tearaway teens who are into shoplifting and soon graduates to taking covert upskirt photos of women, believing sexual perversion to be the one thing that will satiate his father. Meanwhile, Yu’s father falls in love with a sexually aggressive woman who leads him away from his calling as a priest, and Yu continues with his perverse hobby along with his newfound friends. Yu has sworn off sexual or romantic relationships with any woman other than his “Maria”, after his mother told him in his youth that she wanted him to find a girl exactly like the mother of Christ. Unexpectedly, while in drag after losing a bet, Yu meets his Maria in the shape of Yoko (Hikari Mitsushima). This girl is also carrying plenty of emotional and psychological baggage, having suffered physical and sexual abuse at the hands of her promiscuous father. Yoko falls in love with Yu, believing him to be a woman called Miss Scorpion. Unable to confess to her as himself, Yu is in emotional turmoil. A second girl, Aya Koike (Sakura Ando), is meanwhile attempting to destroy Yu’s family, by converting his father to the cult of Zero Church that she is involved with.

Written and directed by Sion Sono the film is clearly the work of an auteur of exceptional talent and unique vision. While a four-hour movie may sound long, Sono’s skill at storytelling and the characters, humour and ideas he manages to pack in make this an enjoyable watch from start to finish. The running time also allows for a full exploration of several of the themes of the movie. The film is chaptered, and with the main three characters of Yu, Yoko and Aya, it is broken up in such a way that maintains the audiences interest throughout. As well as several plot strands, such as Yu’s deception of Yoko as Miss Scorpion, the Zero Church, and even Yu’s father’s romance, each relationship sets up another conflict requiring resolution. The actors all do an incredible job with the material that veers from slapstick to serious without ever undermining itself. Takahiro Nishijima is great as Yu, who is fighting to reconcile his religious upbringing with his emotional urges. It is a credit to him that he creates a believable character of Yu, who could have been simply a caricature pervert. The film later makes a point of contrasting him with just such characters to emphasise his own psychological depth. Aya Koike is a force of nature, manipulative and vicious, though again with good reason. Hikari Mitsushima delivers a spellbinding performance. While her initial appearance seems to suggest a typical angry teenager, as the film progresses and we see her open up emotionally she shows a huge range. In particular her recitation of the biblical passage Corinthians 13 is an incredible piece of acting and one of the highlights of the later portion of the film.

What begins as a satirical look at the perversion of religion and its obsession with deviancy, and in particular sexual deviancy, expands to include various topics. There is throughout an examination of sex, both its dark and destructive aspect as well as its undeniable power and significance in human relations. The film also deals with issues of abuse, emotional, physical and sexual, and how this can impact on the development of individuals. It may be convenient for some to boil the film down to an essential message about the importance of love, or even a more cliched “love conquers all” philosophy, but that would be to miss the point. The film’s multifarious dimensions, the merging and distorting of divine and obscene imagery, suggests an intention to purposely blur the lines between what is and is not sacred or important to humanity. People struggle under the weight of imposed religious morality, and it is openly mocked at times, but there is an understanding that people need something to strive towards or cling to. For some in the film this means substituting the traditional Christian church with a new cult, for others it is an obsession with perversion, for others it is love. “Love Exposure” is rarely condescending, even when pointing out the absurdity of humans. It instead attempts to unravel the various social pressures, psychological foundations, and basic human drivers to understand why humans act the way they do.