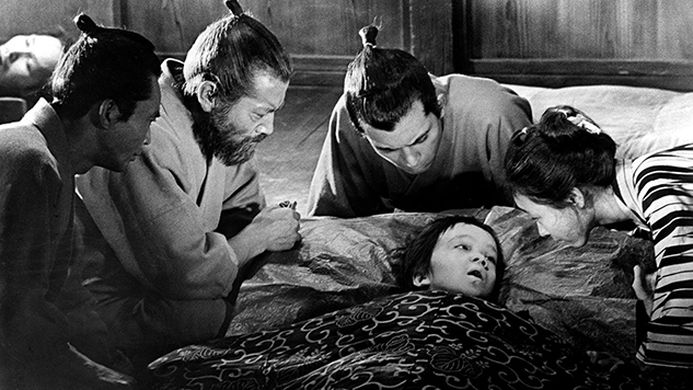 Dr. Noboru Yasumoto (Yuzo Kayama) arrives at a rural clinic run by Red Beard (Toshiro Mifune), a doctor whose patients include impoverished individuals without the money for an expensive physician. Yasumoto is insistent that he is only there on an errand and not to work; he tells the staff that he intends to work for the Shogun and leave as soon as possible. After a prickly reception from Red Beard, Yasumoto decides to sabotage his placement, acting in a lazy  and insolent manner in hopes that he will be dismissed. However, he soon comes to respect Red Beard as not only a skilled doctor but a great man. The film also follows the story of a particular patient’s retelling of his ill-fated marriage, and a young girl who is brought to the clinic from a brothel suffering a fever.

“Red Beard” is directed by Akira Kurosawa from a screenplay by Kurosawa and long term collaborators Masato ide, Hideo Oguni, Ryuzo Kikushima, based on a short story by Shugoro Yamamoto. As with most ofKurosawa’s films this is a period drama, though set a little later than the samurai epics for which he is most well-known. The film is set in the late 19th century and the world is carefully recreated, not only through the sets and costumes, but in Kurosawa’s use of extras. Scenes are often crowded with characters, such as the group of women working at the hospital, the patients,or denizens of this small town. The use of people filling out the backgrounds give a life and vibrancy to every scene. The cast is led by Yuzo Kayama as the arrogant young Doctor Noboru Yasumoto whose arrival chimes with that of the audience into this world. While he is initially rude and unwilling to take on his duties, he is never unlikeable. And as he develops he grows to be a protagonist whom the audience is fully sympathetic too. Toshiro Mifune, known for his starring roles in several Kurosawa films (Yojimbo, Sanjuro), plays Dr. Kyojo Niide, also known as “Red Beard”. Although he is the titular character,he is used somewhat sparingly and to brilliant effect. We see a number of sides to Niide, though never get close enough to fully understand him. Despite his care for his patients, he is also shown to have negative traits, and himself admits that he may be a terrible person. “Red Beard” has a huge and impressive cast, bolstered by the aforementioned supporting roles. Miyuki Kuwano as Onaka and Tsutomu Yamazaki as Sahachi give great performances in an almost stand-alone romantic tragedy. Terumi Niki also gives a heartbreaking performance as Otoyo, the young woman rescued from the brothel.

The cinematography by Asakazu Nakai and Takao Saito creates some powerfully emotional sequences. There is incredible use of shadow in the film. One example of this is the sequence with Otoyo and Yasumoto, when only her eyes are illuminated in a strip of light through the dense shadows. Expert camera movement also provides for creative yet never distracting sequences. The sequence of a young thief sneaking in to steal rice sees the camera effortlessly integrating itself into the film to the extent that you can get areal sense of the environment.

“Red Beard” is a film that wears its politics proudly. It shows the societal scourge of poverty and its effects on the population. Early in the film there are discussions regarding the possibility of improving the health of many of the clinic’s patients by redistributing wealth from those with an abundance of money. This point is driven home by the inclusion of a lord whose rich diet has led to him having the precise opposite problem to many of his poor subjects. His obesity caused by over-indulgence is starkly contrasted to the young boy reduced to stealing food for his family. The film also deals with the issue of prostitution, and the treatment by society of women and the elderly. The film’s strength is in contrasting these everyday problems with more universal concerns of life and death. The film carefully plays out the final moments of particular characters in a quietly emotional way that brings home the finality of death. The end, when it comes, is final, but further highlights the greatness of those in the film who dedicate themselves to saving lives. It is a simple call for kindness over self interest that hits home thanks to the brilliance of the performances and direction.