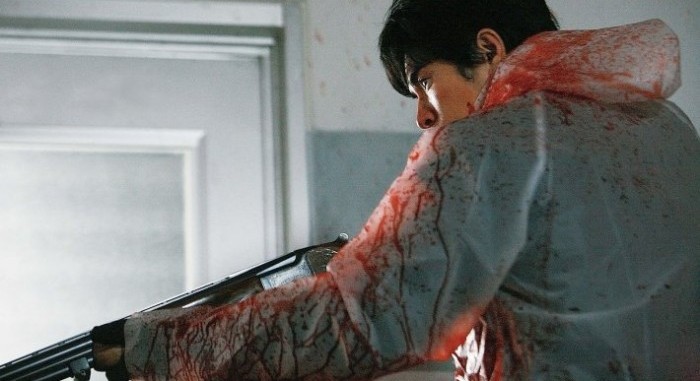 Takashi Miike gives us a violent crime thriller following a deranged psychopath in this gory film adaptation of Yusuke Kishi’s novel. The film begins with a scene in which two parents anxiously discuss their problematic son, right before he murders both of them with a knife. We then move forward in time to find Hasumi (Hideaki Ito) working as a high-school English teacher. He is charismatic and well-liked by his students. Following incidents of cheating at the school, Hasumi suggests perhaps interrupting the signal from their mobile phones during tests, which would be illegal but would also prohibit such cheating. Cheating is far from the only problem at the school, with one teacher sexually harassing a female student, and another involved in an affair with a male pupil. Hasumi also soon reveals himself to be far from the ideal mentor his students imagine, himself using his knowledge of the sexually harassed student to first scare away her abuser, and then to begin an affair with her himself. Hasumi comes under suspicion by another teacher, Tsurii (Mitsuru Fukikoshi), and several students, who believe he may have been involved in a rash of suicides at a previous school he worked for.

The first half of the film plays out as a high-school drama, with elements of a murder mystery, as we delve deeper into the character of Hasumi and discover more of his secrets.  Just as you are beginning to piece together a semblance of what might be termed normality in this world, the film completely throws this plot out of the window and turns into an almost comedic rampage of death and destruction, as Hasumi begins to dispatch the students of the school one by one with a shotgun. Ito gives a great performance as evil incarnate who is able to mask his sadistic tendencies with a veneer of respectability. The film also features a great cast of young actors as the school. Shota Sometani and Fumi Nikaido, who worked together previously in Himizu, KENTA and Elina Mizuno all bring a vitality to their roles as believable high-schoolers trapped in an incredibly dangerous situation.

The film is beautifully shot, with some fantastically atmospheric images and the direction holds your attention throughout. There are striking visuals that add a depth to the film beyond what is in the script. Examples of this include the contrast between the permanently grey shadowy look of Hasumi’s house, and the brightly lit school scenes during the day. Later in the film there is a great tonal discrepancy that emphasises the film’s dark satire, as Hasumi rampages around a school colourfully adorned with balloons and handmade ornaments, often cast in red light.

“Lesson of Evil” can be enjoyed as a straight-forward slasher film, with an evil monster brutally dispatching innocent teenagers. However, the film demands consideration in its use of folkloric and theological allusion. Hasumi is troubled by the appearance of two ravens, we later see him researching Odins corvid companions Munnin (memory) and Huginn (thought). Hasumi kills the raven he names Huginn, but continues to dwell on the presence of Munnin. This is perhaps some reference to Hasumi’s lack of compassion and his senseless crimes, albeit with his past sins being inescapable. While it is easy to see the film as pure exploitation cinema, it plays both sides of the aisle, indulging in this while also offering a perfect satire and critique of our obsession with violence. The high-school massacre at the end of the film goes on so long that you are forced to consider your reaction to it. Ito’s crimes transform from being blackly comic with the first unexpected killing, through terror when you realise that he is not going to stop, and finally a sort of numb sense of inevitability that you are going to witness the slaughter of every innocent child at the school. The film is unflinching in its portrayal of violence, creating a sense of uneasiness as it flips between moments of humour (such as Hasumi being temporarily deafened by the sound of his gun), to horror as we see students cowering in fear. We see several moments in the film that may be a direct attack on American gun culture and the tragedies stemming from it: these include Hasumi’s own past as a Harvard graduate, his use of English, and later in the film a scene in which he trips over an American flag as part of a moon landing display. In fact this entire sequence of slaughter is rich with background details that speak to the waste of talent and creativity that such killings result in. We are also left to ruminate as the title of the film suggests on what we mean by evil, whether and how it can be defeated. A number of characters plead with Hasumi for an explanation of his actions, but none is forthcoming. At the end we are left only with the horrific aftermath and no clearly picture of what caused it. Again, this may be an attempt to poke fun at the notion that killing and violence can be understood rationally or that crimes such as this can be ameliorated by context.

As with many of Miike’s films, “Lesson of Evil” blends a number of genres, making you unsure what to make of it at times. In the end you are left to reflect on your own experience and impressions of the film, and perhaps come to a deeper understanding of yourself through it. As the killer says to the police in the film, it is not his job to explain why he has done what he has done, that is for them to do. The same might be said of the audience. It is not necessarily the artist’s job to explain themselves clearly, it is your job, as the viewer, to consider what you have seen and your reactions to it and see what that tells you about society and yourself.