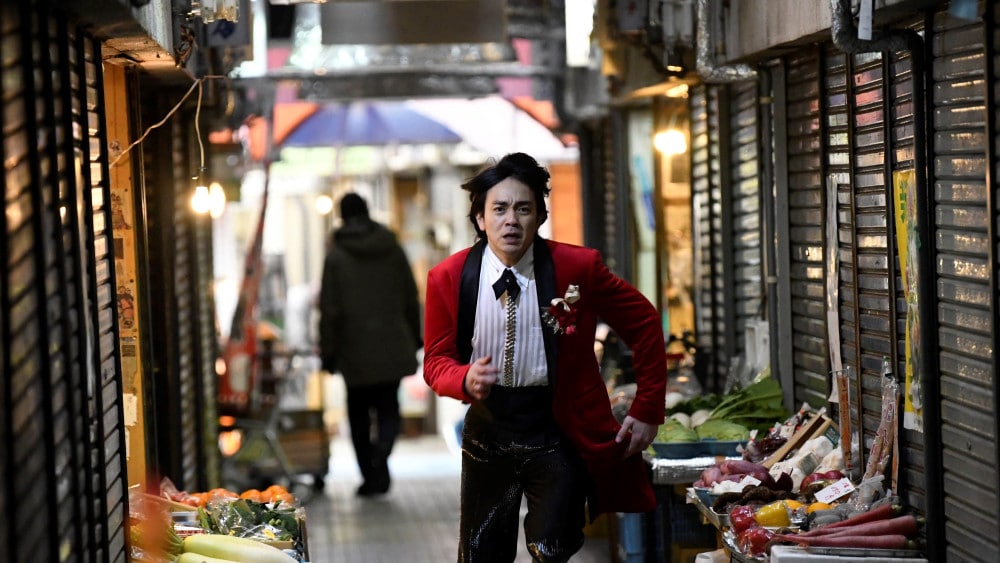 A blackly comic tale with three interconnected stories taking place over a single day. Enka singer Hiroshi (Sho Aoyagi) is kidnapped by a superfan, who forces him to record a new song for her; recently released from prison, Tetsuo (Nobuyuki Suzuki) is on a vengeful mission, attacked by the former gang members who left him to the police, while taking care of his ailing mother; and Takeru (Keita Machida) is a man who is attempting to do three good deeds a day in hopes that this will mean his comatose girlfriend recovers.

The film is very funny, though often with a dark twist, with kidnapping and violent street fights. All three of the stories are given time to develop and the way that they interconnect is interesting. The film begins with a sequence in which a man is driving an injured woman in a car, creating an instant sense of mystery. It later loops back to this same scene, now with the audience understanding who the characters are and the circumstances leading to this juncture. Much of the film takes place at night with characters wandering the city streets, and the cinematography does a great job of capturing the murky, dimly lit city. With three stories woven together the film has a good rhythm, intercutting between them and flowing from one to another. The script is written to create mystery about the characters and it gives the audience a chance to guess at what might have happened before given an explanation. In the story of Tetsuo the film is almost a straightforward crime action revenge film, while Hiroshi seems to be living in a black comedy, and Takeru a tragic relationship drama. The actors are do a good job with their characters, fully believable even in unbelievable situations. The various tones of each section should not work, but somehow they coalesce into something like a tableaux of warts-and-all modern life.

“jam” is a film about the interconnectedness of human experience and how ones actions impact on others. The three characters can be roughly categorises as good, bad and neutral, and there are explicit references to ideas of karma and fate. The world is populated by people with varying motivations and understandings of the world and their place in it. This is typified particularly by the Enka singer, whose fans seem to draw a deep meaning from the songs, while he has no real interest in the song order or their significance. It is about how society functions with so many diverse people, how they clash or work together, how good intentions can lead to bad outcomes, and every action has consequences. An enjoyable film that brings together three disparate characters and plots in a unique way.