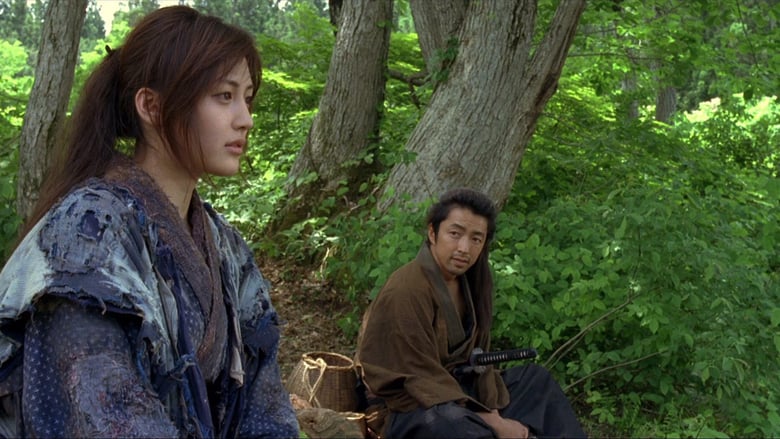 Haruka Ayase stars in this female-led reimagining of the famous tale of a wandering blind swordsman. The film begins with a brief backstory of “Ichi” (Ayase), a blind woman who is part of a group of Goze (travelling musicians). She is ostracised and expelled from the group for having lain with a man. She sets out to find her tutor, a blind swordsman. She meets a man, Toma (Takao Osawa), a samurai who seems to be completely hopeless with his sword. When the two of them are attacked by bandits, Ichi quickly dispatches them. Believing it was Toma, the Yakuza running the town, led by Toraji Shirakawa (Yosuke Kubozuka) decide to hire him as a bodyguard to help with their struggles against the nearby bandits led by Banki (Shido Nakamura). Still with hopes of finding her master, Ichi remains with Toma as the two prepare for a showdown with these violent outcasts.

The story of Zatoichi, the blind swordsman, has been told many times in film, and it is a tale that requires very few elements to be effective. Haruka Ayase gives a great performance in the lead role, both fearsome yet fragile. We learn about her backstory, the rape that she suffered and her expulsion from the group of goze, her struggles to form relationships with people and her quest to find a purpose in her life. She is also looking for a reason for the bloodshed and killing she seems incapable of escaping. Osawa’s Toma is likewise a troubled individual, battling his own demons that prevent him from becoming a great swordsman and living up to his father’s expectations of him. The film’s main weakness is that it spends little time on these interesting character aspects and instead forces the characters into less engaging conflicts with the villains. Shido Nakamura is clearly enjoying himself, gleefully hamming it up as Banki, alongside Riki Takeuchi as his chief henchman. Their cartoonish performances feel slightly out of place with the more moving scenes between Ichi and Toma. Where the action is concerned the film does an excellent job of portraying the elegance and fatal effectiveness of Ichi’s technique. There are several standout moments when it comes to the choreography, such as the attack on the village by bandits and Ichi’s showdown with them. Unfortunately, there is often a lack of realism in the film, which jars with its earnest attempts to garner sympathy for the characters. The costumes and sets are well designed, and thought has been put into them, but they are often so pristine looking and a lack of extras is to the film’s detriment when it comes to believability.

In trying to deliver both an energetic action film and a more character-driven drama, “Ichi” just misses the mark on both. The film’s central themes are those of discovering your purpose and understanding the value of human life. In a film that sees so many unceremoniously cut down it is an odd message to attempt to deliver. Ichi is a woman who is unable to see right from wrong as she puts it, having rejected notions of morality through her own harrowing experiences. She is desperately searching for guidance, exemplified in her quest to find her former master, and someone to show her the ‘light’ (to use the film’s own metaphor) out of her nihilistic impression of the world. The film is entertaining as a simple action tale, but it brushes too quickly over certain moments that would have leant some emotional depth and wastes a great performance from Haruka Ayase.