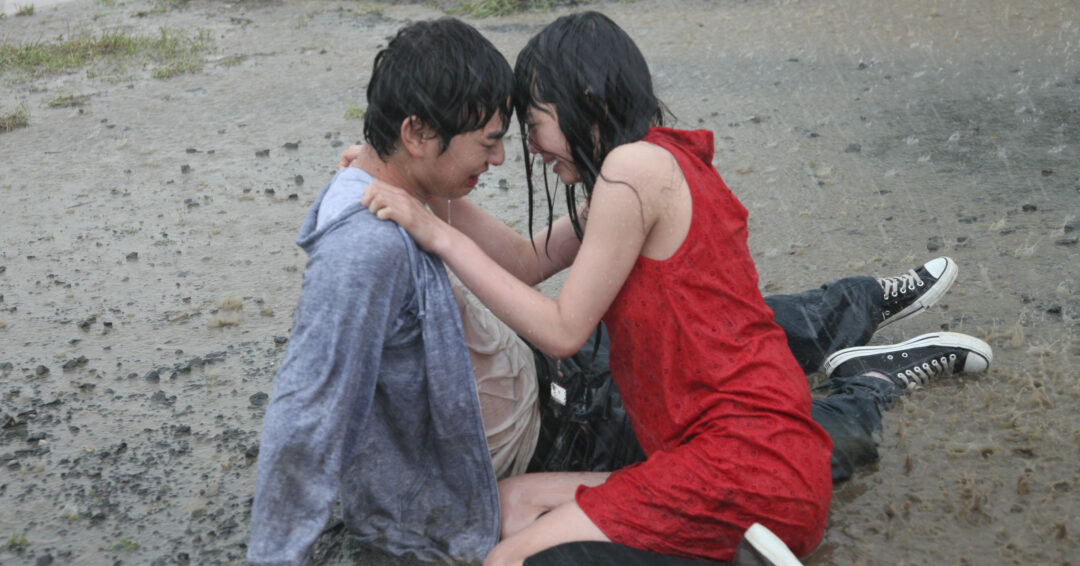 The 2011 Tohoku earthquake and tsunami, that devastated the North-east coast of Honshu and badly damaged the Fukushima nuclear plant, left many without homes and jobs and in a state of despair. “Himizu” begins with scenes of the destruction left behind: buildings reduced to rubble, personal possessions abandoned, and lonely figures wandering through the wasteland of a once populous town. Sumida (Shota Sometani) is a middle-school student whose family boat business has stalled in the wake of the tragic events. His parents are of little help, his mostly absent father returning only to demand money to furnish his own debts, and his mother finally giving up to run off with a fling. Sumida’s only companions are a group of homeless individuals whom he allows to stay by the boathouse and use the shower. His classmate Keiko Chazawa (Fumi Nikaido), is obsessed with Sumida, writing down and pasting his words on her bedroom walls; enamoured by his ordinariness and refusal to conform to the positive world view espoused by their teacher. Keiko decides to help him make the boathouse successful again, despite him repeatedly rejecting her assistance. Keiko’s mother is unsupportive, telling her daughter she is preparing a noose for her to hang herself and make her parent’s lives easier. Despite this Keiko remains positive, encouraging Sumida not to give up and trying to help him out of his depression.

Based on the manga by Minoru Furuya, writer-director Sion Sono creates an uncompromising drama set in the post-tsunami era: a dystopia that is nevertheless grounded in reality. The script was written before the Tohoku earthquake and tsunami, but was altered to feature this as a central element. The tragic events of 2011 loom large in the film, which uses its protagonists to tell a story that reflects the feelings of many. The financial ruin and feelings of depression that beset Sumida will be familiar to those who suffered. Meanwhile, Keiko represents the feelings of hope that they can rebuild and that however dark things are there is light at the end of the tunnel. Shota Sometani captures the cold, detached malaise of a young man who has suffered beyond his years, with tumultuous feelings of anger and unfairness repressed as he tries to come to terms with his fate. Fumi Nikaido provides the perfect foil as his gleefully hyperactive stalker, who bears her own sorrows lightly. A talented supporting cast includes Tetsu Watanabe as a simple-minded yet kind-hearted homeless man; Megumi Kagurazaka as Keiko’s uncaring mother; and Denden as a tough yakuza boss. The film’s narrative moves between the main characters and gives us a stark portrayal of a society that is trying to rebuild from the debris of disaster. Despite the generally downbeat tone of the film, there are moments of levity and humour sprinkled throughout, with the homeless individuals providing much of the comic relief. The direction and cinematography by Sohei Tanikawa is exceptional, pulling you through a chaotic emotional landscape with a visceral sense of the pain the characters are feeling. The shots of the earthquake-stricken locations need little extra to evoke feelings of upset at the realisation of what has been lost; and the film manages to retain this powerful, provocative air throughout, with the characters being sympathetic victims of the tragedy and emblematic of the anguish caused by it. The film features a classical score of Mozart and Barber that further heightens this intense dramatic quality.

As well as dealing with the aftermath of the earthquake, the film also touches on other topics, such as domestic violence, suicide, nuclear power, the far right, abuse of women, and mental health. It questions humanity’s response to such tragedies, with secondary characters discussing how they personally profited from the devastation. Later in the film we see characters turning to theft and violence, further emphasising the fact that bad people will continue to exist. In contrast, Sumida is a character who is unable to pick himself back up following the loss, his feelings of being trapped and seeing no future for himself are a powerful representation of the crippling effects of depression. The question for the characters is what they do with their own lives; whether they allow themselves to be overcome with despondency and hopelessness, or strive to change their situation, in short how they go on living after such a traumatic experience. The poem that opens the film, read by Keiko, and is repeated by Sumida near the end, talks about people judging others while being unable to understand themselves. This can be read as a message to people to believe in yourself, to examine your own will, hopes and dreams and to follow them no matter how difficult it might seem. The film offers few easy answers, with an enigmatic ending that provokes deep rumination on the many themes raised by the story. An incredible work that documents the loss, in every sense, felt after the earthquake, and encourages us to consider how we go on.