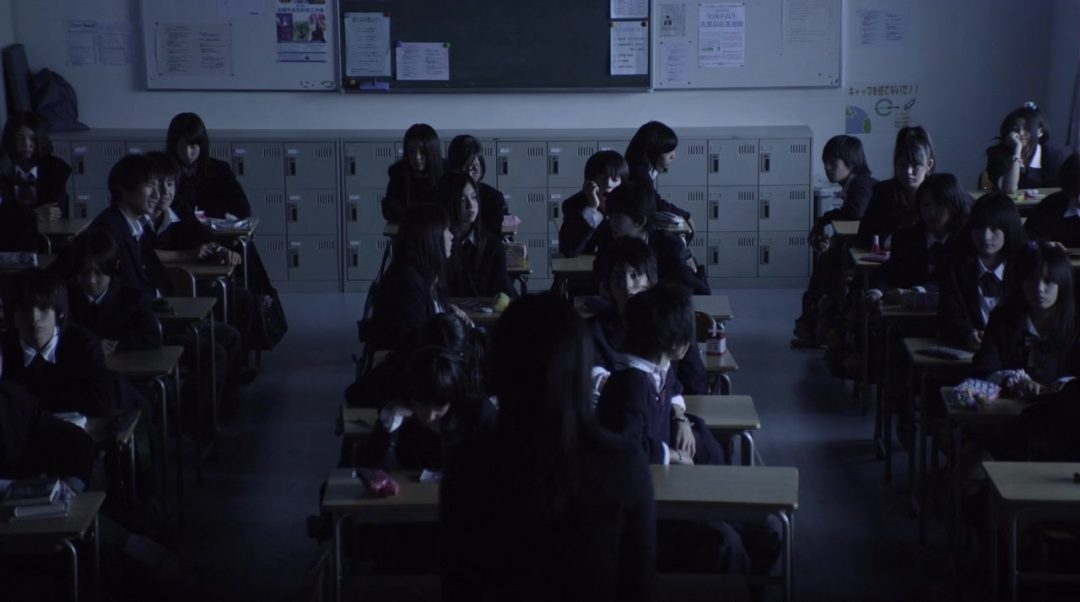 A stylish psychological thriller that exposes the ever-present darkness as the heart of humanity, “Confessions” tells the story of a school teacher Yuko Moriguchi (Takako Matsu), whose 4 year old daughter Manami (Mana Ashida) is found dead in a swimming pool. While the police verdict is accidental drowning, Moriguchi knows that two of her own students bear responsibility for Minami’s death. Shuya Watanabe (Yukito Nishii) is a talented student who has a nihilistic outlook on life. Abandoned by his mother at a young age, he is narcissistic and lives only to prove his superior intelligence in the hopes of winning his absent mother’s attention and affection. He recruits his classmate, the underachieving and unsuspecting Naoki Shimomura (Kaoru Fujiwara), in hopes that the two of them will commit a crime that will finally gain him the respect he feels he deserves. Moriguchi tells the class that she will leave her job and, as her students are unable to be punished for crimes as minors, she has taken it upon herself to get revenge for the murder of her daughter. The film begins with Moriguchi’s story and moves onto the lives of the two boys responsible for her daughter’s death, as well as a third classmate, the enigmatic introvert Mizuki (Ai Hashimoto), both before and after the incident. Each new perspective draws us deeper into this twisted story of murder and revenge.

The film is based on the book by Kanae Minato with a script by director Tetsuya Nakashima. The story is divided into distinct sections, each narrated in part by a different character, occasionally achronological with overlapping moments from different perspectives. The opening monologue delivered by Takako Matsu’s experience acting in theatrical productions shows as she builds tension with her delivery of a long opening monologue. This scene, which takes up a large portion of the first half of the film is a fantastic introduction, setting up the dynamics of the characters and their personalities, the central themes, and a lot of exposition in an entertaining way. The young actors who play the three leads do an incredible job with difficult material. Yukito Nishii embodies the fears of parents and teachers everywhere as the irredeemably sadistic Shuya. Kaoru Fujiwara is sympathetic as the helpless accessory to murder who later reveals a darker side to his character. Ai Hashimoto does a good job with a relatively small role as Mizuki, a confused adolescent; and Yoshiteru Terada  offers some light relief as the oblivious replacement teacher Yoshiteru “Werther” Terada, attempting to raise the spirits of the class following Moriguchi’s departure. The film is shot in a highly stylized way with liberal use of slow motion and the plot unfolds at a crawl that further accentuates the feeling of dread, allowing characters to languish in their suffering or feelings of regret. A subdued colour palette and melancholy score echo this bleak tone. Almost each scene plays out in a half light that reflects the nihilistic worldview of the characters; with neither light nor dark, but a hopeless Sisyphean grind of life unfolding day by interminable day. With a strong original story, the cinematography and direction are used to create an artistic impression of what is unfolding, with striking visuals that enhance the force of the narrative; such as Shuya’s construction of a clock that runs backwards, or the cat and kitten outside his apartment.

“Confessions” is a film that deals with several difficult themes. The death of a small child will draw instant sympathy from the audience. It is a wrong that demands to be righted in any just world. A verdict of accidental death removes any hope of retribution for the crime, forcing Moriguchi to revenge herself upon her two students. By showing the story of Shuya and Naoki, the film asks us to consider their own right to life and what led them to this crime; also how blame is to be apportioned and what punishment may be justified. Mizuki’s character highlights the turmoil of conflicting adolescent emotions, her character sympathising with a schoolgirl who killed her family. Throughout the characters ask themselves what life is truly worth, each of them so lost in their own subjective realities and borne along by feelings of hurt and hate that they are unable to see that they are causing more suffering through their actions. Although the film muddies the morality of its characters, throughout it retains a strong message on the importance of human life. While it is almost unbearably bleak in its outlook, there are faint rays of hope that shine through; hints that things could be different, that ideals such as forgiveness and redemption are not unattainable.