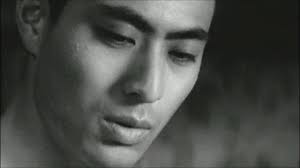 Good for Nothing (1960) by Yoshishige Yoshida

Ikuko Makino (Hizuru Takachiho) works as a secretary for Mr. Akiyama, whose son Toshio (Yusuke Kawazu) spends his days idling around town with his group of similarly aimless friends. Toshio and his friends, including college student Jun (Masahiko Tsugawa), pick up Ikuko and tell her they are going to rob her. After releasing her the group continue to torment her in various ways. However, Jun and Ikuko begin an awkward relationship, with Ikuko attracted to his carefree attitude towards life.

Written and directed by Yoshishige Yoshida, “Good-for-nothing” is a societal drama with tragic-romantic elements. The characters are interesting, typifying conflicting beliefs about the state of the Japanese economy. Mr. Akiyama is a successful businessman, ably negotiating his way past rivals and representative of the capitalist mindset of ever expanding profits. His son, Toshio, on the otherhand is spoiled, simply living off his father, and his friends in turn leeching off him. Jun, a poor student, is drawn in by Toshio, enraptured by the lifestyle of the young playboy, without a care in the world, seeing everything in life as a game to be enjoyed rather than striving for anything meaningful. Ikuko is in part trapped between these two worlds, longing for the freedom, financial and personal, of Toshio and his friends; while having to work for her living and become a productive member of society. She is strong-willed, capable, forthright, but perhaps conditioned by her environment, while she sees other possibilities in the complete rejection of society exemplified by Jun. The film plays out this contrast in differentiating the city from the beach, the former being a stifling, noisy, unpleasant place where rigid societal norms see office workers repeating the same dutiful yet unfulfilling roles. At one point in the film it is even described as being no place for humans to live. While the seaside is a place where a horizon of limitless potential can be seen. Again, represented by Toshio’s friend who dreams of leaving Japan for America. The film occasionaly spells out its politics and philosophy explicitly, with characters giving on-the-nose analysis of their own situations or that of society. However, it also does a fantastic job, aided by some superb performances, of giving emotional, believable examples of the struggle between the economic system and basic human desires.

In one scene we hear a voice over expounding on the subject of Archaeology. The film itself acts as the sort of cultural artefact that gives us an artistic yet accurate depiction of life at this time, with issues that remain relevant to this day. The romance of Ikuko and Jun appears doomed from the beginning due to their conflicting beliefs. Jun is unwilling to become part of society, despite the financial security it would provide, while Ikuko longs for freedom but is not prepared to sacrifice her position in Akiyama’s company.