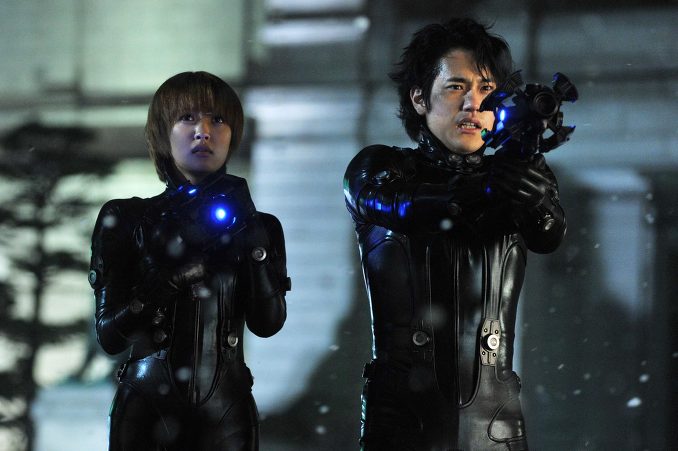 Following on from the first Gantz film, we pick up the story of Kei Kurono (Kazunari Ninomiya) as he continues fighting aliens, trying to collect enough points to resurrect his friend Masaru Kato (Kenichi Matsuyama. This film adds more mystery to the central plot, with a girl carrying a small Gantz-like orb that tells her to kill various people (referring to them as keys), a group of black-suited men attempting to track down Gantz, and a detective also attempting to unravel the secrets of the various incidents occurring around the city.

If you enjoyed the first Gantz movie, this one offers more of the same. The new additions to the story are good for the most part, further pulling the rug from under your feet if you thought you had a handle on what was happening in the first movie. There are some fantastic action sequences here too, with long fight scenes on a train and in the city streets taking up a large chunk of the run-time. I felt that these suffered from being a little over-long, and not having the same sense of fun or originality as the first film (an onion alien is a much funnier and unique concept than men in black suits). We see a little more of Kurono and his girlfriend Tae Kojima here, and also learn more about Kato. I didn’t feel entirely satisfied with the ending to this film. It brings things to a conclusion, but in a way that still leaves many things unanswered.

This film plays more on the interpersonal relationships of the protagonists, there are some great moments of sacrifice, team-work, and the ending is a nice way to round off the series with the idea that even ordinary people can achieve extra-ordinary things if they try. A fun “part two” to the first film, and I would definitely recommend it as an action packed science fiction film with a great sense of style.