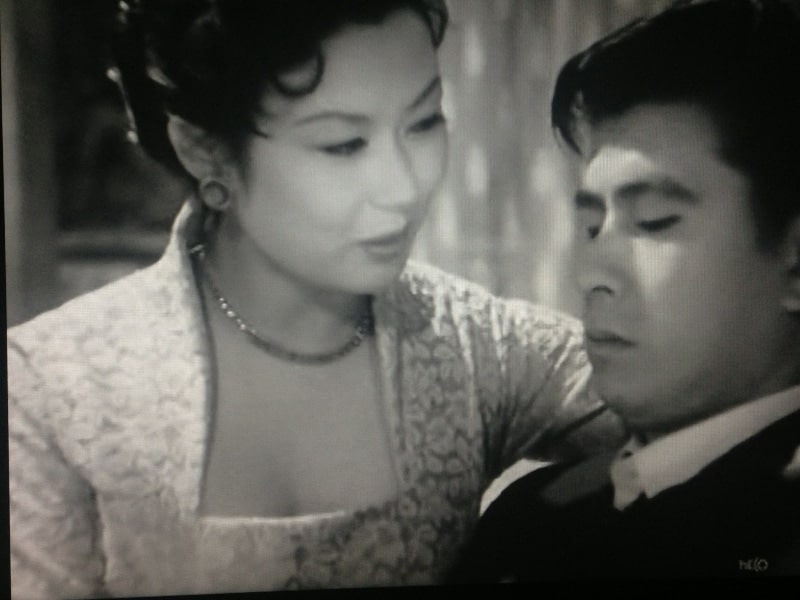 Hidden behind the glamourous streets and bright lights of Tokyo’s Ginza is a seedy underbelly of sex and criminality. With prostitution outlawed, gangs run “call girl” businesses fronted as legitimate enterprises. One such operation is being run out of the “Arizona” nightclub. Detective Yoshioka (Ken Utsui) is an undercover cop from Osaka working with the Tokyo police to unravel the various criminal connections which link Japan to international groups. He soon meets an old flame Rose Rumi (Yoko Mihara), a dancer at “Arizona” and part of the criminal conspiracy, and Haruko (Akemi Tsukushi), a reporter who has followed him on the lookout for a big scoop.

Directed by Teruo Ishii and written by Ishii and Akira Sawada, “Flesh Pier” is a crime thriller centred on the world of sex work and prostitution. The film shies away from titillation, with sexualised scenes being confined to the nightclub “Arizona” and their scantily clad dancers. Utsui is a charismatic lead, the slick noir detective playing double-agent in the dangerous Tokyo underworld. Mihara gives a great performance as Rose Rumi, a woman who has made mistakes but is intent to put them right, bringing sensuality, heart and toughness to the role. The film is well-written with a number of characters all of whom have their own personal stories going on but which pull together in a thrilling showdown. There are twists and turns as characters are threatened with being uncovered. The dialogue is snappy, with the sparse, noir style delivered stylishly by the actors. The music moves from the jazz of the nightclub to a sinuous orchestral score that envelops the drama.

“Flesh Pier” is a film about a city and a country going through major changes. One of the major changes is a more outward looking Japan than may have been common pre-war. We see the police dealing with international crime syndicates trafficking women. English newspapers are seen, American characters feature, and the Japanese characters are well-travelled and familiar with other cultures. The foreign influence extends to the smart suits, casino roulette wheels, and cabaret clubs, and other cultural imports. The foreign characters are the villains in the film, but the film does not shy away from showing the darker side of Japanese society either. The film’s portrayal of women is equally balanced. It shows the objectification of women in nude photoshoots and cabaret clubs. But also has two strong female characters. Rumi and Haruko are both fearless and forthright, a sign of the changing times in a typically male-dominated society. We see the shame associated with prostitution and how it is something typically levelled at women. The film seems to be dealing with many of these themes just at the point they were reaching the public consciousness or able to be discussed openly. It does a perfect job of capturing a period in time with a thrilling narrative and a director with a great sense of style.