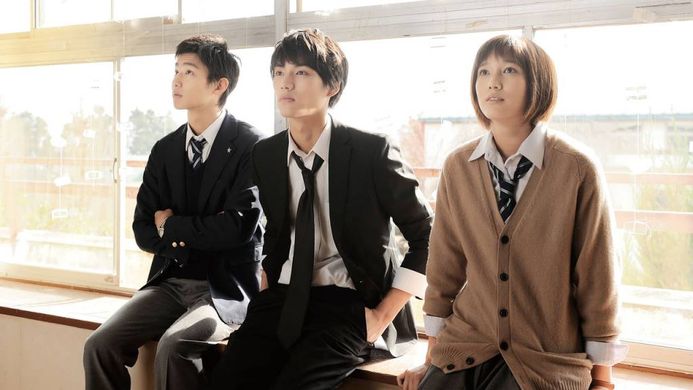 High-school student Shuta Jogasaki (Sota Fukushi) visits his friend’s mother’s house on the second anniversary of his friend Saku’s death. It is clear that he feels some responsibility for what happened. While there he finds a time-travel watch. Sceptical at first, he soon discovers that the watch allows him to travel back in time to just before his friend died. He is reunited with his former high-school friends Saku (Shuhei Nomura) and Michiru (Tsubasa Honda), who he has drifted apart from following her move to England. Shuta decides to alter the events of the past so that Saku might live. He is confronted by the ghost of a girl at their high-school who is trapped there following a similar disturbance in the flow of time. This girl, Kyoko (Honoka Miki), warns him not to interfere with events that have happened in case he too becomes stuck in this parallel time.

Written and directed by Yasuhiro Yoshida, Enoshima Prism blends elements of high-school romance and time travel in a light-hearted comedy that touches on the theme of friendship. The time travel twist is a novel way to tell the story and creates an energetic pacing as Shuta moves back and forth between past and present. The main cast all work well together as the three childhood friends. The character of Kyoko is a great addition and almost sees the film start to take on a paranormal, ghost-story, element that manages to shuffle in quite comfortably beside the time-travel plot. This paranormal element is also complimented by the character of science-teacher and occult enthusiast, Matsudo (Yo Yoshida), who gives a great comedic performance. Despite some good performances and interesting story ideas, “Enoshima Prism” often plays things safe as a genre high-school tale. A melodramatic score and simple, almost by-the-numbers, style of shooting give things the feel of a television drama.

The film’s focus is on the power of friendship and the consequences of altering the past. While the film does not break much new ground in terms of its plot, the love triangle and time-travel dilemmas having featured in many high-school dramas, it does have a few interesting ideas (such as the ‘time prisoner’ Kyoko) and the story moves at a good pace. The understated cinematography and light piano score, while not adding much, do not detract from the performances and blend of comedy, drama and science-fiction that make the film an enjoyable watch.