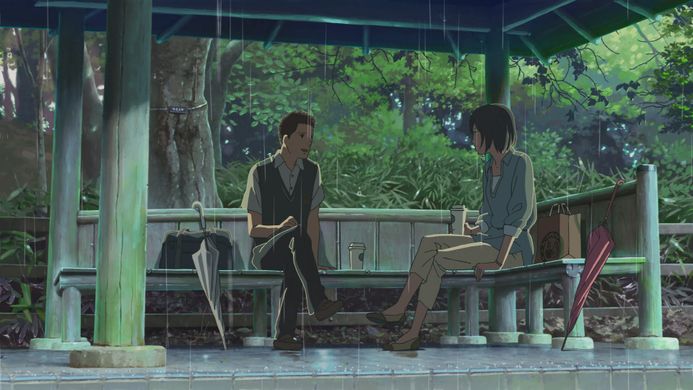 Takao Akizuki skips school each morning to go to Shinjuku Park. Here he meets a Yukari Yukino, an woman who is also shirking her job to sit alone drinking beer and eating chocolate. Takao dreams of becoming a shoemaker while Yukari has her own problems. As rainy season begins  the two sit together in a park shelter, discussing their lives and learning more about one another, forming an intimate friendship.

Writer and director Makoto Shinkai has an instantly recognizable style, with incredibly well-rendered locales and emphasis on the minute details that many would ignore, but which are of paramount importance in creating a sense of place and time. “Garden of Words” is no different in this regard and his depiction of Shinjuku and the park in the middle of the sprawling city is a joy to behold. It is a space that you could spend an eternity in, picking out each droplet of rain and marvelling at the reflections. The art, animation, sound design, and direction all work to build a tangible, living environment. The film is short but this works in its favour considering the story. Where many films would stretch the run time with unnecessary subplots, each scene in “Garden of Words” is poignant and essential in understanding the characters. There is a poetry in the script that compliments the beauty of the imagery.

Given the premise of the film, it would be understandable to expect a romantic drama. However, the film is far more subtle, painting a believable and touching vignette of these two characters who simply share time together, influencing each other in a quiet yet important way. In a world grown increasingly cold and isolating, this simple act of sharing a quiet moment becomes almost transcendent. The sublime visuals, and the mesmeric piano score by Daisuke Kashiwa that drifts effortlessly between melancholic and uplifting, create a space in which to contemplate your own thoughts along with the characters. “Garden of Words” is beyond film, it is a truly special piece of art, confident in its message and delicate in its delivery.