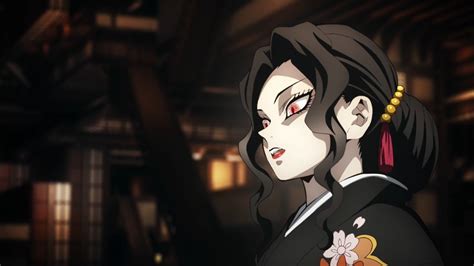 When Tanjiro Kamado’s (Natsuki Hanae) family are brutally murdered by a demon, he is set on a path to become a demon slayer, an elite of warriors tasked with protecting the world from these creatures.  His mission is complicated by his sister, Nezuko (Akari Kito), who has been transformed into a demon. Unlike most demons, Nezuko is able to restrain herself from devouring humans, and Tanjiro hopes that his journey may lead him to a cure for her eventually. The two are joined by fellow fighters, Zenitsu (Hiro Shimono), a boy constanly on the lookout for love, and Inosuke (Yoshitsugu Matsuoka), a reckless swordsman who wears a boar’s head mask. Together they take on various demons, in the hopes of one day catching up with their leader Kibutsuji (Toshihiko Seki).

Based on the manga by Koyoharu Gotouge, “Demon Slayer” follows in the tradition of stories such as “Dragonball” and “One Piece”, with it’s young male protagonists on a journey of self-discovery, battling monsters, and growing stronger with each encounter. From the off the story begins with several great hooks, the murder of Tanjiro’s family, a mystery surrounding his father, and his sister’s transformation, all of which beg for resolution. As with many fantasy shows there is a lot of world-building, with the various fighting styles, Blood Demon Arts, and mythology surrounding the demons and demon slayers. Each demon they encounter comes with a unique style of fighting, which helps keep the episodes fresh as more is uncovered about their abilities. There is an often unusual blend of tones and styles throughout, with the show shifting gears rapidly from the comedic eccentricities of Zenitsu and Inosuke, to the sombre and often poignant backstories of Tanjiro and many of the demonic characters. These more wacky moments work to lighten the tone, which would be relentlessly downbeat and disturbing if we only had the melancholic quest for revenge of our protagonist, but often seem aimed at a younger audience than the show would be suitable for. This is certainly not a show for children, with brutal fights that do not hold back on the blood and gore; decapitations and dismemberment are common occurances in the life of a demon slayer.

“Demon Slayer” is set in the Taisho period and does a good job of depicting the dress and lifestyle of the time. The art and animation, in keeping with the story, consists of several styles, with stunning backgrounds and weather effects, and more cartoonishly exagerated character moments. The character designs are very much in keeping with the manga style, large eyes and expressive features, and are used to give everything a sense of energy. Despite being packed with melodramatic moments (many characters are prone to wailing and howling in anguish), the show does manage to be genuinely moving. This is helped by the epic score by Yuki Kajiura and Go Shiina. Alongside the incredible animation, the soundtrack helps build a sense of scale and tension.

“Demon Slayer” is a film about light and dark, life and death. With the transformation of Nezuko early on in the show, we are left with a difficult moral choice (familiar to fans of zombie movies): she is a demon, a flesh-eating monster, but also family. Tanjiro believes in her absolutely and will do anything to protect her, while other demon slayers want to destroy her. Throughout the show we are presented with this kind of moral dilemma, with many of the demons having tragic backstories.Tanjiro’s aversion to killing is understandable and makes him more human than many action protagonists who jump willingly into slaughter. Theological themes around the notion of good and evil abound in the show, and it is this on top of the action that makes an entertaining watch. Zenitsu and Inosuke, and later the elite Hashira demon slayers, are also good examples of flawed characters. Although they are ostensibly the heroes, they often behave irrationally, selfishly, or stupidly, creating a further sense that perhaps demons and humans are not so different after all. An incredible adventure story with dark themes, action-packed moments and a compelling cast of characters.