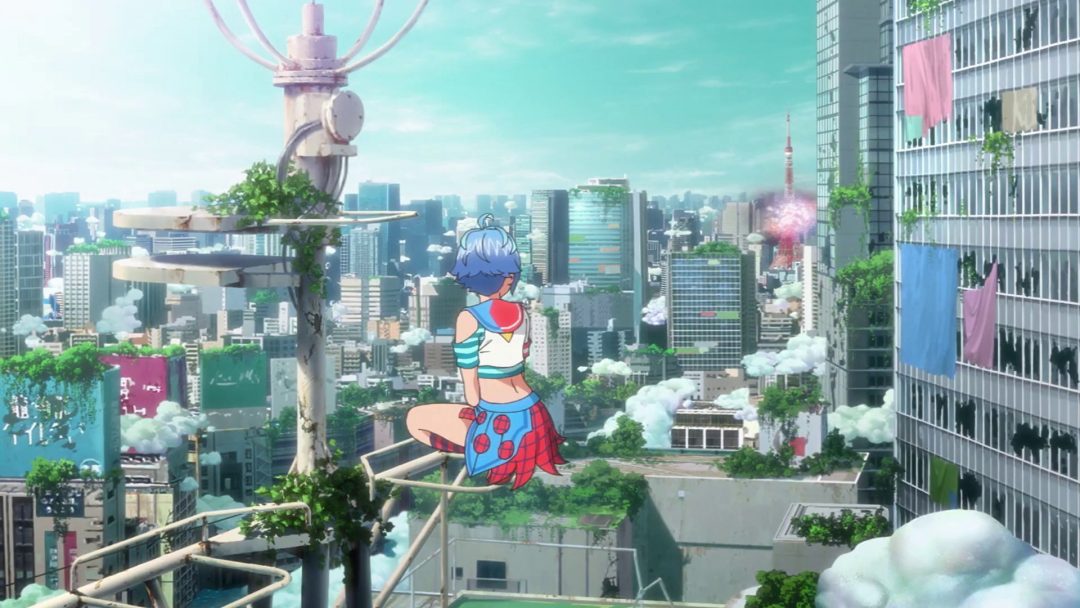 Mysterious bubbles descend on Tokyo, destroying the city and leaving it mostly submerged under water. Years later, the survivors have formed into teams who compete in parkour competitions for scarce resources. Hibiki (Jun Shison) is a member of the Blue Blaze team, fighting against the Red Lobsters, Denki Ninjas, and the dangerous technologically-advanced Undertaker group. The Blue Blaze squad live on a ship with Makoto (Alice Hirose), a scientist who is researching the strange bubbles that are still present and that have led to odd permutations in gravity. Hibiki, a solitary figure, finds companionship in the shape of Uta (Riria), one of the bubbles who comes to life in a modern take on The Little Mermaid folk tale.

There is a lot to like in “Bubble”, drawing as it does on various popular tropes and ideas from anime, fantasy and folk tales. The central story, a post-apocalyptic group of survivors provides an interesting backdrop to the romantic Little Mermaid-esque tale of Uta and Hibiki’s relationship. The film’s philosophical underpinnings reference both environmentalism, in the shape of the flooded city and vast cosmological ideas such as the inevitable desctruction and potential rebirth of the universe. The animation and artwork are exceptional, with detailed depictions of the sunken city and colourful, opalescent light shows with stars and bubbles creating a psychedelic experience. The action is top-class with a focus on parkour being a great way to show the CG-enhanced environments. The story is underexplained, perhaps relying on audience famliarity with both the romanctic and post-apocalyptic genre, with the characters also falling into easily recognizable stereotypes. No real explanation is given for the bubbles, or Uta’s apperance, and there is little character development outside of Hibiki, whose struggle with over-sensitivity to noise (his name meaning “sound” or “echo”, alongside Uta’s “Song”), is an emotional angle to the loner protagonist archetype. However, what the film does do well is in creating a moving, energetic, thought-provoking experience; not always logical, but alwasy engaging. The score by Hiroyuki Sawano complements the heart-pounding action and quiet contemplation of the film.

“Bubble” features the sunken cities of 2009’s “Shangri-la” and the frenetic, death-defying action of “Attack on Titan”, the vibrancy and detail of Makoto Shinkai, and the magical fairytale dreamscapes of Mamoru Hosoda, but brings it all together in a unique package. It may be slightly lacking in a strong central motivation for the characters, but the visual spectacle means that it is easy to ignore this lack of depth and simply marvel at the colourful animation and emotionally chaged romance. In a final summing up, the film reaches for some sort of message for humanity, settling on a traditional moral characterised in the saying “Fall seven times, get up eight,” in suggesting that loss can be overcome and people will always rebuild from destruction. This life-death cycle could have been worked in to the story earlier, and more sense made of the bubbles, which are window-dressing for the most part, but overall the film succeeds in being a magical experience.