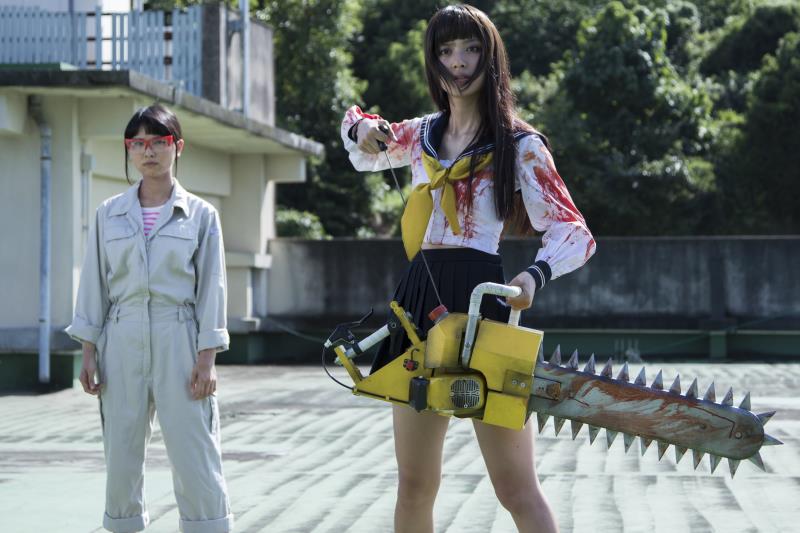 Rio Uchida stars as a chainsaw-wielding teenage delinquent in this slice of silly splatter comedy. Giko Nokomura (Uchida) is a rebellious high-schooler, who inexplicably totes around a chainsaw (telling her teachers it’s due to her family’s construction business). On her way to school to take a make-up test she is waylaid by a group of classmates who have been transformed into cyborgs by Nero Aoi (Mari Yamachi), a troubled fellow student. Amongst them is Sayuri Bakutani (Seira Sato), whose post-human upgrades include the ability to fire rockets from her crotch. As well as these cyborg students, Giko also has to deal with members of the ninja club, led by Hanzo (Yuki Tamaki), a transgender student whose ninja skills are also bolstered by Nero’s experimental cyborgization.

“Bloody Chainsaw Girl” is a tongue-in-cheek splatter comedy, fully aware of its own ridiculousness. Director Hiroki Yamaguchi includes everything that you might expect from the genre: low budget special effects, unnecessary upskirt angles and unexpected nudity, hyper-energetic performances, gory dismemberments, and plot-holes galore. The film’s humour does provide a few puerile laughs and gets by on the sheer audacity of the film-maker’s intentions. Much of what happens seems like an attempt to test out various special-effects, utilising CG and practical effects, with the flimsiest of plots stringing these things together. The film is based on the manga by Rei Mikamoto, and the direction shows this influence in its unrestrained use of dutch-angles and frantic camerawork, as well as the music video-like credits sequence that is straight out of an anime. The score by Masahiko Horikura is emotional and solid. As with the direction, it shows a competence that sometimes seems wasted on this particular story. The film makes great use of its locations. Although the abandoned school and rooftop are staples of the low-budget genre, the underground industrial facility makes a superb villain’s lair.

The cast do a great job with their characters, treating them with largely undeserved reverence. Uchida’s Giko is a no-nonsense, unwilling heroine, more concerned with the results of her test than the bizarre cyborg invasion happening around her; while Mari Yamachi goes all-out super-villain with her over-the-top performances as Nero. At around 80-minutes, the film gets straight into the action and is a clear run to the final showdown. An entertaining splatter film that leans into its silliness. There is a message here, about how loners can choose between two paths, of revenge or acceptance of who they are, as well as references to sexism and bullying; but to be honest the plot and themes are largely iirrelevant. Simply switch off your brain and enjoy the gory spectacle of a high-school girl tearing through cyborgs with a chainsaw.