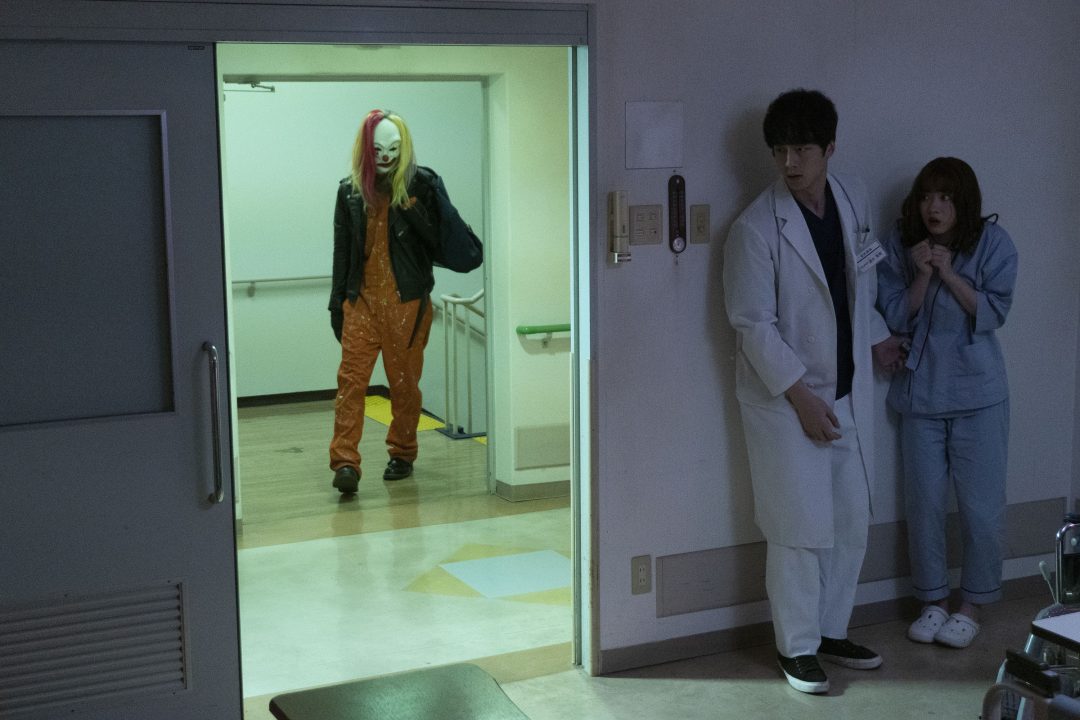 Junior doctor Hayami (Kentaro Sakaguchi) is brought in by his senior Kosakai (Ryohei Otani) for a night-shift at a former psychiatric hospital, vestiges of which include the disused and padlocked operating theatre and iron bars that can be used to close off the upper floors, making them inaccessible other than via the elevator. Hayami is met by nurses Higashino (Noriko Eguchi) and Sasaki (Rio Uchida) and doctor Tadokoro (Masanobu Takashima). Not long into his shift a man in a clown mask who recently held up a convenience store arrives with his hostage, a woman named Hitomi Kawasaki (Mei Nagano). Hayami’s night is made worse through macabre discoveries about the goings-on at this hospital and his own feelings of guilt about the recent death of his girlfriend Yoko (Izumi Fujimoto), Kosakai’s sister.

If it sounds like a convoluted plot, that is part of the appeal of this unsettling thriller. Based on a novel by Mikito Chinen, who worked on the screenplay alongside director Hisashi Kimura, “Masked Ward” traps a small cast of characters in the environs of the hospital and maintains the tension by steadily revealing a series of dark secrets that piece together in horrifying ways. Many of these mysteries and disparate elements seem irrelevant or incompatible until the end when they are drawn together. The film spends a lot of time setting up this complex plot and struggles to give its characters significant depth. Hayami and Kawasaki’s relationship is developed through shared experiences of trauma and Kentaro Sakaguchi and Mei Nagano give solid performances as people trapped in a difficult situation. The film plays with chronology, beginning with a single unseen survivor from the events that go on to form the majority of the plot. This sets up a tense atmosphere as you know early on not everyone will get out of the hospital alive. It also works to throw you off the scent, offering unreliable information that the audience must attempt to sift through. The script and direction work to keep this sense of mystery, and the film is at its best when the characters are confined to the hospital, with fear and suspicion ever present. The film occasionally utilises unecessary flashbacks that often add little to the plot, for example in showing the audience what has happened previously after a character has just explained the same thing. This tendency to show too much also applies to the crash sequence depicting the accident that led to Yoko’s death, which would have been more impactful with suggestive editing rather than showing what is a fairly underwhelming stunt.

For the most part “Masked Ward“is a solid pared back thriller, setting up a small cast in a single location with the viewers anxious to see who will survive the night. Later the film transitions into a morality tale about unscrupulous medical practices and revenge. The need to maintain the mystery early on means that many of the themes remain obscure for a long time which leaves the third act feeling like a different part of the story. Hayami’s guilt over Yoko’s death is largely abandoned in favour of Kawasaki’s story, which is interesting, but again suffers from a sudden shift in tone. The film may have been better focussing on the hosipital and treatment of patients early on to let the audience in on the secret prior to it becoming the central focus. The film works well as a tense crime thriller, with the fugitive armed-robber and his hostage holing up in the hospital; and the third act moral drama about what has been happening at the hospital is also interesting, but somewhat hamstrung by the film having that mystery element and inability to tell the audience that that is where we are heading. The film moves at a fast pace, with lots of great reveals, but feels a little disjointed, both in the script and editing, perhaps suffering slightly under the amount of plot threads and ideas it attempts to bring together.