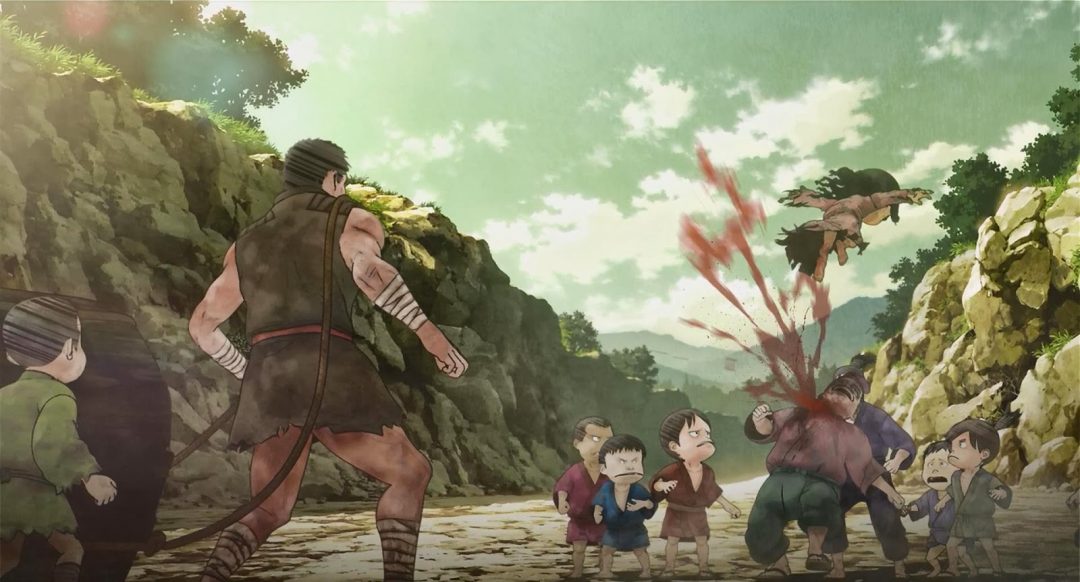 In a world suffering from famine a woman gives birth to her son. With starvation warping her sensibilities she almost resorts to eating the infant to survive. Terrified by the thought of what she was about to do she runs, leaving her child to fend for itself. Eight years later the boy (Masako Nozawa) has become feral, killing and eating people to stay alive. When he crosses paths with a monk (Kinya Kitaoji) he is little more than a beast, snarling without language and knowing only how to fight. The monk gives him the name Asura and tries to steer him back to a path of humanity, attempting to teach him Buddhist sutras. Asura later meets a young woman, Wakasa (Megumi Hayashibara), whose kindness encourages him to follow a better path. However, some people want revenge for the deaths he has caused and the darker side of Asura’s nature is always lurking just beneath the surface.

Based on a manga by George Akiyama, Asura is directed by Keiichi Sato. The animation style blends 3D computer generated models with a hand-drawn style. The characters have a sketchy design, with pencil lines visible on their features, which gives the film a storybook feel. This complements the plot which resembles a fable. There are some stunning sequences enabled by the digital art techniques, such as soaring aerial shots, and the final battle. The computer-aided graphics also provide some fantastic weather and lighting effects and give the world a tangible feel, further enhanced by great sound work. The music by Yoshihiro Ike, Norihito Sumitomo and Susumu Ueda includes a thrilling theme and an orchestral feel that offsets the drama perfectly. The story is tragic and the emotions raw. There are also a lot of bloody action sequences and the kinetic energy of Asura’s acrobatic fighting style is a joy to watch. The character of Asura is likeable despite his horrific deeds in the early part of the film and provokes genuine sympathy in his struggle to rein in his atavistic instincts in favour of more civilised behaviour. Again the look of the characters goes a long way towards making them memorable and the film as a whole has a unique feel.

Asura is at heart a simple morality tale about redemption and retaining ones humanity in the face of terrible circumstances. In the beginning of the film Asura has lost all semblance of humanity, having resorted to killing to survive. He moves and sounds like an animal and has no compassion for other humans. The priest and Wakasa, by contrast, are prepared to die rather than sink to the level of killing or indulging their worst instincts. Through their kindness Asura is shown another way to live. It is an interesting moral conundrum as to what should be permitted in order to survive. In a harsh world, where starvation leads people to desperate acts, is it possible to retain a civilised society? Alongside this question, the film also asks the audience to consider Asura’s position, having already committed terrible crimes. Can and should he be forgiven? Can he redeem himself? Some of those Asura meets treat him as a villain, others as a victim, and this impacts him in turn. A film that asks important questions of its audience, with excellent animation and a unique style.