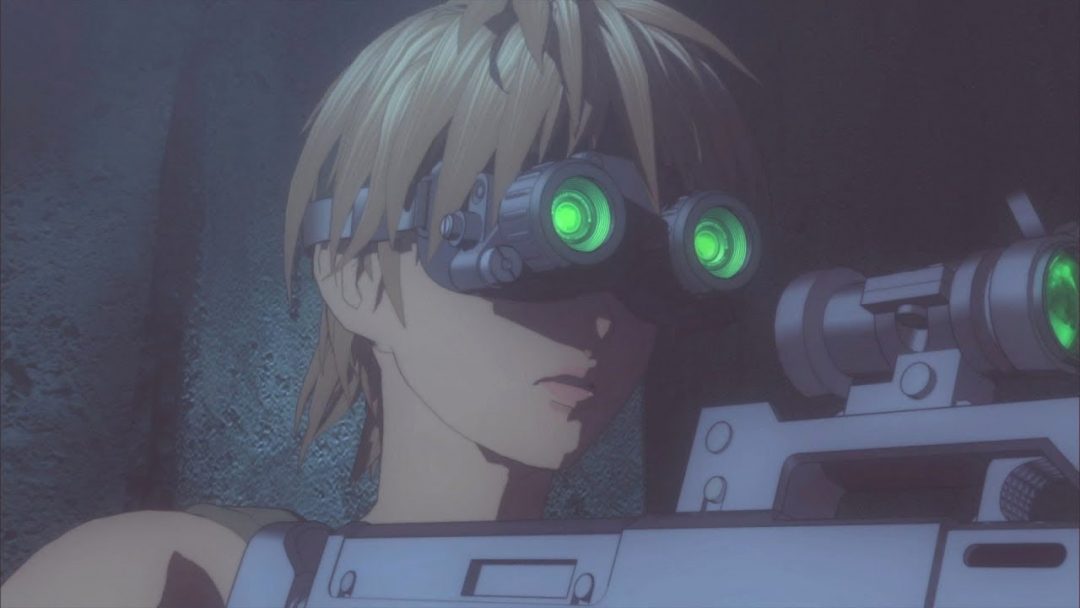 The film opens on a young soldier Deunan Knute (Ai Kobayashi), fighting amongst the rubble of a bombed city. After a battle with robotic enemy forces she is picked up by ESWAT, an elite team of soldiers, who tell her she no longer needs to fight. The world war that has devastated the majority of the planet had no ultimate victor. The surviving humans have retreated to a Utopian city named Olympus. The population of Olympus, half human and half Bioroid (synthetic humans), live a peaceful existence, their lives dictated by a supercomputer named Gaia and the Bioroid leader Athena (Mami Koyama). Deunan is reunited with her old partner Briareos (Jurota Kosugi), who has lost his body and been given a new cyborg one and a Bioroid Hitomi (Yuki Matsuoka) who is assigned to help her adjust to Olympus. The peace is short-lived when they uncover a plot by the army, led by General Uranus (Yuzuru Fujimoto), to overthrow what he sees as a Bioroid dictatorship and establish human supremacy again. Deunan and Briareos must fight to maintain the delicate balance that has been established.

“Appleseed” is based on the manga by Masamune Shirow (Ghost in the Shell) and does an incredible job of world-building, introducing us to Bioroids, Gaia, ESWAT, Landmates and other technologies and systems that create a believable backdrop to the action. The design of all these elements is spectacular and there is clearly an attention to the minutiae and practicalities of everything. The animation uses a cell-shaded CG technique that gives the film a unique look and the flexibility of the camera allows us to swoop around the ruins of the city in the opening and the vast scale of Olympus in a way that gives a sense of reality and permanence to the setting. If there is one issue with this style it is that it leaves certain things looking too pristine, lacking texture and wear. Where the animation really excels is in the action sequences, from the opening battle with tanks and snipers, hand to hand brawls, gunfighting, and the final destructive battle, the choreography and camerawork enabled by the animation make for fast-paced exciting moments. Director Shinji Aramaki has an eye for dramatic action sequences, with the rain-battered remote laboratory sequences being a particular highlight. The music by Tetsuya Takahashi and Boom Boom Satellites is a mix of electronica, rock, and an occasional emotional piano track. The soundtrack suits the futuristic feel and is a shot of adrenaline for the frenetic action scenes. Deunan is a great protagonist, established as a legendary soldier, her relationship with Briareos and her backstory give her complexity and sympathy from the audience. There is not a lot of time spent on the relationship between her and Briareos as the plot involves a lot of exposition and the various twists and turns allow little time for character building, but those moments we do see work well and offer just enough to keep you emotionally invested.

“Appleseed” is laden with philosophical and political discourse, questioning the future of humanity as we become increasingly reliant on technology. The character of Deunan, a hardened soldier, is fitting for the narrative as she encapsulates the warlike nature of humanity, but also the compassion that can hold us back from violence. The tension at the centre of the film arises from General Uranus’s realisation that humans are no longer the dominant force on the planet and his desire to rectify what he sees as the natural order. Violent tendencies make humans unsuitable to rule without safeguards, as their past actions have shown that they seem hellbent on their own destruction. Far from technology being the danger, it is technology that protects humans from themselves. However, the lust for power and human failings continue even in the future and create problems that must be constantly guarded against. The film’s message is one of the importance of balance. It is interesting that early in the film Hitomi notes that the population of Olympus is roughly 50/50 Bioroid and humans. To have more of one or the other, as the villains of the film desire, would upset the balance of society. The strong anti-war message of the film is also stated obliquely in a similar way. The world war produced no victor, only losers. To compete for absolute dominance is a futile endeavour, and the only way humanity can proceed is by acknowledging the need for co-operation. A science-fiction action film with an important message on the future of humanity and how catastrophe might be averted.