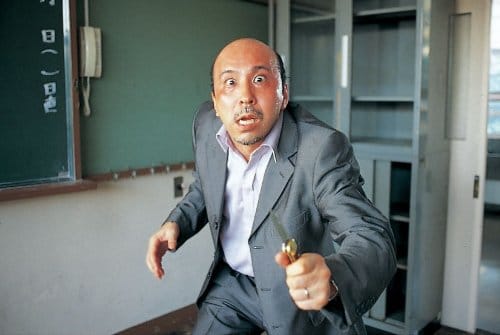 A trio of schoolgirls, Mizuki (Nobuko Sakuma), Yuka (Chieko Kawabe) and Maya (Sena) are gathered for a photoshoot at an empty high-school. While working on the shoot they begin to notice strange occurrences, beginning with the talent scout, Isaka (Kanji Tsuda), seeming to appear in two places at the same time. There is a old rumour that if you see your doppelganger you are doomed to die. Hisaka is chased by his own double and falls from a window at the top of the school where they are shooting. Other doubles soon begin appearing and the group are tracked down one by one.

Director Issei Shibata (The Chasing World) is working with a small cast and a micro-budget on this film. The cast do what they can with the material, but once the central concept is set up it’s a straight line to the finish as they are picked off one by one. There is minimal character development before the plot begins and later in the film, when we learn a little more about some of the characters, it is too late to form a real attachment with them. While the supernatural killings are given some explanation it is a fairly rote idea. Being made on such a small budget, the film is limited in what they can do in terms of the direction. While it is competently directed it rarely shows signs of brilliance. The special effects are poor and largely unnecessary. With a film of this type it would have been much better to suggest the horrors and traumas that are besieging the characters, rather than attempt to show them. In parts the laughable effects even undermine the tension that is established. This twinned with the drama being set entirely during daylight hours means that it is unlikely that the film will frighten anyone with even a passing acquaintance with other horror films.

Doppelgangers are an old horror trope and one ripe for allegorical interpretation. However, the film never really delves into the characters in any significant way. We learn that Maya was abused as a child, but again this is used only to service the plot rather than offer any emotional weight to proceedings. A largely forgettable film that struggles to provide anything in the way of originality or scares.