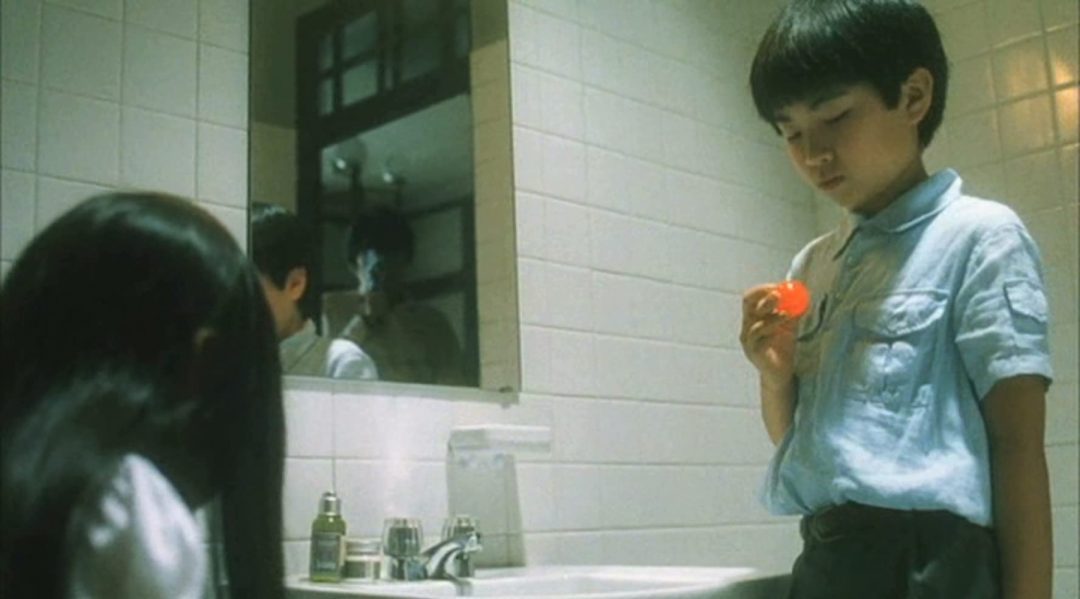 Nagisa Sugiura (Yuka) is auditioning for a role in a film adaptation of a real-life murder story. Many years before a man killed eleven people at a hotel in Gunma, including his own son and daughter. Nagisa is cast to play the young 10-year old daughter who was murdered, but things soon take a sinister turn when she begins to see visions of this girl and starts to wonder if there is something supernatural going on. Another actress, Yuka (Marika Matsumoto), a firm believer in reincarnation tells her this could be a possible explanation, something hinted at throughout. As work begins on the film the director Matsumura (Kippei Shiina) takes the cast and crew to the hotel where this horrific incident took place and Nagisa begins to spiral into a nightmare somewhere between memory and hallucination.

Directed by Takashi Shimizu (The Grudge, Marebito) from a screenplay by Shimizu and Masaki Adachi. “Reincarnation” is a chilling experience, mixing a haunted hotel mystery with psychological horror. By setting up the film within a film, the writers create doubt about what is going on that continues until the final moments. We are never sure how much of what we are seeing is real, or whether Nagisa is hallucinating. This sense of unease is pervasive, particularly later in the film, as it is not only the characters but the audience themselves whose sense of reality is being toyed with. Whereas many horror films offer an easy escape, the villain of this piece is not easily identifiable, and so impossible to counter. This sense of an unstable reality is heightened with great use of practical effects, such as the appearance of the young girl who was murdered at various moments. The editing also plays with the sense of space, by having the camera move from the real world of Nagisa, into her imagination, through the memories and old footage of the incident, and the constructed set of the film. This perfectly captures her increasingly warped psyche as she tries to establish what is happening to her. The music by Kenji Kawai (Dark Water) creates a dark atmosphere with echoing strings and synth providing an ominous backdrop to the action. The use of creaks and knocks and later the whirring of an old-fashioned camera help to build a soundscape that is terrifying without the need for bombast. The film builds a quiet dread throughout, rarely relying on gore or shock moments, but a creeping terror that draws you in and has you on the edge of your seat. The simplest of effects are done with finesse, such as the child’s doll that comes to life, or the sudden traumatic flashes of murder victims that assault Nagisa when they visit the hotel. Much of this imagery gets under the skin and troubles you long after it has passed, creating that feeling of an ineffable darkness waiting beyond this world. The terror of the unknown is brought to the fore. There are moments that don’t make strict logical sense, such as Nagisa’s casting as a 10-year old girl. However, this matters very little in the overall scheme of things, as we get the full psychological and emotional weight of what Nagisa is going through in a way that may have been diluted if everything was neatly explained. Yuka gives a great performance as the haunted and terrified Nagisa, capturing her descent into fear and panic as she struggles to untangle the strange web of unfamiliar memories she is caught in.

“Reincarnation” relies on familiar tropes, such as restless spirits and revenge, but does everything so well that it is a model of how these stories should be told. The idea of ghosts returning to life to seek vengeance plays on the primal fear of the unknown. Death is the great boundary that people can only cross in one direction and the thought that there may be two-way traffic is disturbing. It also ties into notions of guilt and shame about tragic events that have happened and the inability of people to change them. Nagisa is deeply troubled by the events of the past. We also witness her feelings being dismissed or disbelieved by those around her, again offering a deeper layer of horror to events. Not only is she beginning to lose any solid foundation for her reality, she increasingly has nobody to turn to for reassurance. “Reincarnation” is an excellent example of a film with great scares born of the concept and characters, truly terrifying in parts, with a dark twist.