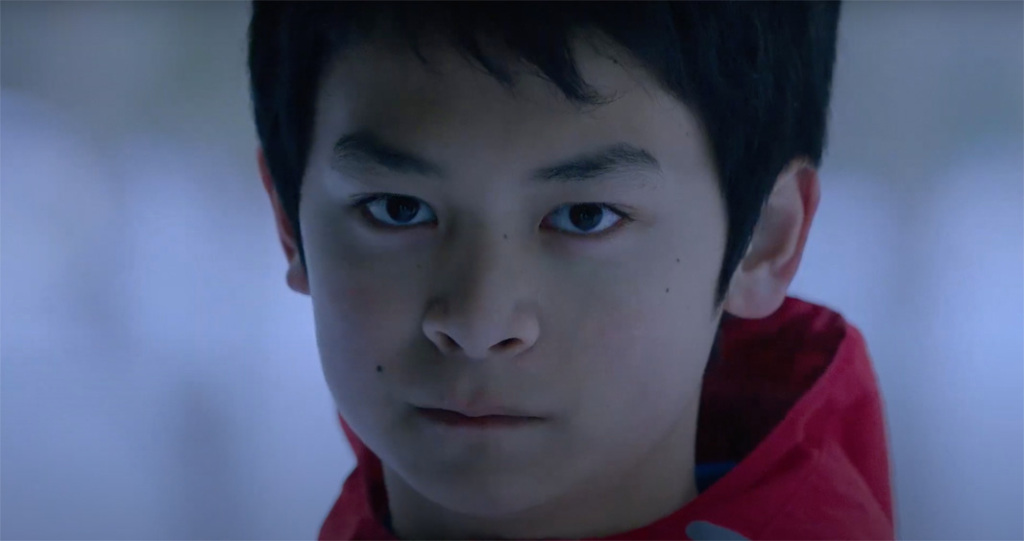 Kanto (Kanto Shimokura) is a young boy living in the small town of Akan in Hokkaido. He wants to escape from his rural hometown and Ainu heritage, telling his mother that he feels he is constantly reminded of his culture in their songs, festivals and traditions that are an integral part of life in their community. Having lost his father, Kanto’s confusion about whether to embrace or shun his heritage, takes on a greater personal significance for him; the absence of a paternal role model leaves him feeling cast adrift and having to his own path in life. Kanto is not without help on this journey of self-discovert. His mother (Emi Shimokura), who runs an Ainu craft store, is caring, though hurt at her son’s seeming disinterest in his culture. He also has a substitute father-figure in the shape of Debo (Debo Akibe), an Ainu elder, who attempts to teach him their traditions. Debo fully embraces their heritage, wearing his culture as a badge of honour and believing in the absolute necessity of preserving their traditions and values. Along with others, he is preparing for a cultural festival that has not been performed for many decades, in which they must raise a bear cub before killing it. The spirit of the god inside the bear will then return to the heavens carrying word of their good deeds and other gods will come to inhabit the animals of their lands.

Born in Hokkaido, writer-director Takeshi Fukunaga shows great respect for the native Ainu. He worked with the local community in creating the script, and cast Ainu locals. The film documents various aspects of Ainu culture, music, dress, festivals, traditions and beliefs. We also see the friction, and subtle discrimination, between the Japanese and the Ainu; with Kanto’s mother being praised by oblivious tourists on her excellent Japanese. As well as insights into the Ainu culture, the film also shows the difficulty faced in attempting to hold on to these traditions. The Ainu are taking classes to learn the Ainu language, and must read from scripts when performing their rituals. It is a constant struggle to keep these cultures alive as languages and traditions are forgotten or eradicated. At heart “Ainu Mosir” is a coming-of-age story with Kanto facing the added pressure from those around him to take on the role of an ‘Ainu’ individual. Kanto himself is a typical teen, playing in a rock band and watching Hollywood films. He feels pigeonholed as an ‘Ainu’, railroaded into becoming what is expected of him, where he wants a future of wider possibilities. He sees his culture as restrictive; while Debo sees it as a source of pride, his deep roots giving him confidence and a sense of identity. Casting Ainu actors in the main roles helps lend an authenticity to the film and genuine emotion to the performances. The cinematography by Sean Price Williams, with stunning vistas of rural Hokkaido and the passing of the seasons, provides the perfect background for this story of people shaped by their environment.

‘Ainu Mosir’ is a significant film for what it says about the value of culture and the difficulties experienced by native peoples who feel their past is being erased. However, it wears this lightly and never lectures the audience on matters such as colonialism, xenophobia, racism, and the struggle for the rights of indigenous groups. Rather these issues are refracted through the personal story of Kanto and his own difficulties coming to terms with his heritage and the loss of his father. While the film focusses on a specific culture, its message is universal. A worthwhile film for its moving portrayal of a young teen at a crossroads in life, who must learn what is important to him, while navigating the turbulent waters of family, culture and heritage.