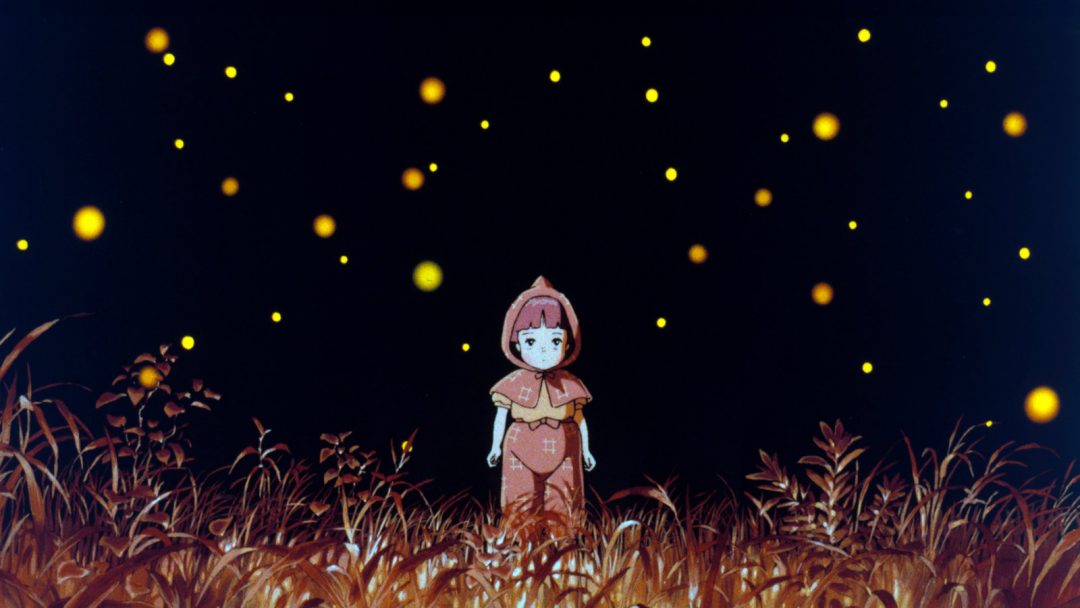 Grave of the Fireflies (1988) by Isao Takahata

A harrowing story of suffering in the aftermath of war. The film begins in September, 1945. A young boy, Seita (Tsutomu Tatsumi), is slumped, exhausted, in a station as people pass by him. Seita tells us in narration that this is the day he died. Later a cleaner finds a candy tin full of ashes beside his body and throws it out. Fireflies appear from the tin and the spirit of Seita’s young sister Setsuko (Ayano Shiraishi) who warmly greets her brother as he heads off with her. We are then taken back to the two siblings when they were alive, living with their mother. Seito’s father is a navy officer away on duty. When their town is firebombed, Seita and Setsuko are forced to flee their home. Their mother later dies at the hospital and the two travel to live with an aunt in an unfamiliar town. The aunt is at first happy to provide for them, but soon grows impatient, begrudging them food and a roof as she cares for her own children. Finally growing tired of constant put-downs, Seita takes his sister to live in an air-raid shelter. The two struggle as food shortages grow and the town comes under threat from further attack.

Based on a semi-autobiographical short story by Akiyuki Nosaka, “Grave of the Fireflies” is incredibly moving as we see the horrors of war as experienced by the two orphans, starving and alone. There are a few lighter moments as we see them playing together and the strength of their relationship. It is poignant to watch as Seita attempts to provide for his sister and protect her innocence by not telling her about their mother’s passing. Writer and director Isao Takahata crafts a story that is simple yet packed with the minutiae of everyday life, from daily chores to the children playing together each moment is carefully observed. The animation is very understated with a slow melancholic feel to it. The subtle details add great texture to the world, such as the itching of the characters that grows as the film progresses, and the small insects that come to symbolise the struggles of the two siblings. In lingering shots of a dying firefly, or brief moments of ants scurrying under cracked pavement stones, the fragility and beauty of everyday life is brought to the fore. Michiyo Mamiya’s classical score is used sparingly, welling up at times as an emotional release to the narrative.

“Grave of the Fireflies” captures a period in history that many would like to forget. The suffering of war is often romanticised, or sanitised in sepia photographs of fallen soldiers, or quiet graveyards. Here we are shown the true horror of war, with burn victims, malnutrition, frayed tempers, and people trying their best to survive an unbearable situation. The film also shows the importance of laughter and living. Though Setsuko’s life is short, each moment we see her laugh or smile with her brother we are given a sense of the importance of life. The metaphor of the fireflies, who burn brightly for a brief time, is unmistakable here, yet in the delicate depictions of the quotidian it never feels forced. As the war comes to an end, we see people returning to their hometown full of joy and relief at the end of their struggles, while Seita carries with him the weight of his sister’s death. This powerful message, about not forgetting the victims of war, is further emphasised in the final moments. Seita and Setsuko sit on a hill looking down on the skyscrapers of a modern city, in the darkness, forgotten to the world, yet watching over them. Far from an easy watch, this reminder of suffering carries an important warning to future generations not to repeat the humanity’s past mistakes.