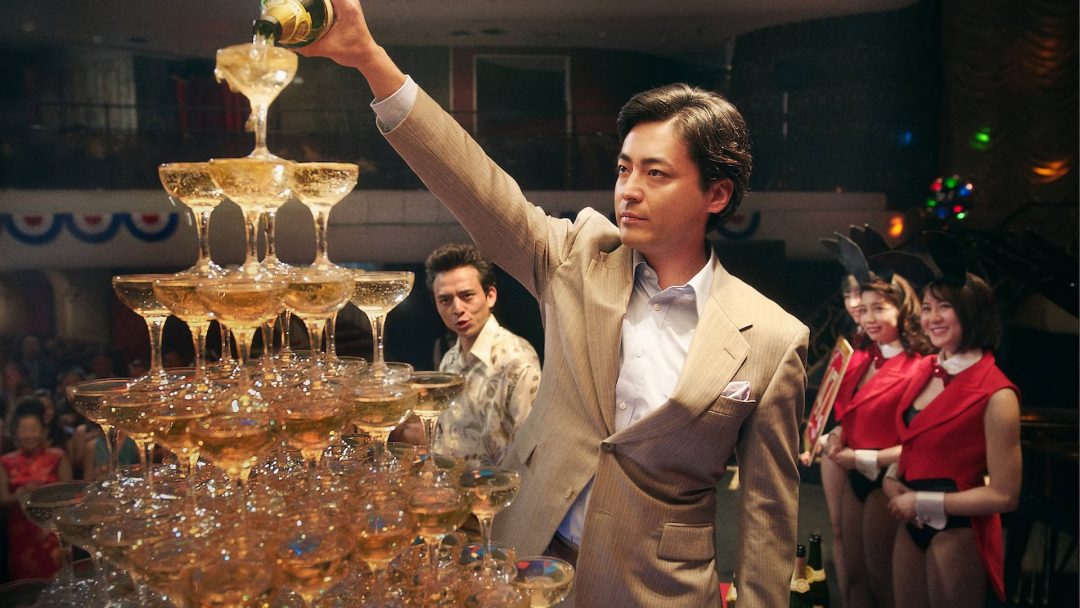 Toru Muranishi is a famous name in the world of Japanese porn, prominent from the heyday of the industry in the 1980’s as one of the most prolific directors of adult videos. Based on real events, this television drama takes us back to the formative years of his directorial career and the numerous revolutions that typified the era. The first episode begins with Muranishi (Takayuki Yamada) standing in nothing but his white underwear with a large camera on one shoulder as he holds forth about the importance of his profession. We are then taken back to Muranishi working as a salesman for English encyclopaedias. He has a talent for sales, convincing his customers that they absolutely need these encyclopaedias to improve their personal and professional lives.

When he comes home to find his wife, and the mother of his two children, having an affair with his co-worker, his world is thrown into turmoil. While out drinking he meets Toshi (Shinnosuke Mitsushima), a young man who is flogging illicit audio recordings of couples from a nearby love hotel. The two strike up an unlikely partnership with Muranishi’s talents making a huge success of their business. Together they get into producing their own magazines together with a third partner Kawada (Tetsuji Tamayama). As times change, so do they, setting up adult stores and later getting into making pornographic videos. Along the way they are beset by the puritanical Japanese police and their strict censorship laws; the yakuza who have a hand in the largely underground industry; and their rival porn studio run by wealthy boss Ikezawa (Ryo Ishibashi).

The series is hugely enjoyable. While Muranishi and Kuroki are real and this is based on a true story, it is unclear precisely how much of this is dramatized. Whatever the case may be, it is packed with action, with Muranishi on the run from the police or shooting pornographic films, and also a lot of drama, especially in Kuroki’s relationship with her mother that forms the heart of her story. There is a lot of sex and nudity in almost every episode and it doesn’t hold back from a graphic depiction of its subject matter. Some may complain that the series smooths off some of the edges of the porn industry, and of the characters. Later in the series things do take a dark turn as we see the introduction of drugs, in the form of meth, being used to trap young women into performing. However, the majority of the series takes the tone of a light-hearted romp with comical moments and the stakes are largely confined to financial troubles or the company struggling to survive in a competitive industry. The story is full of twists and turns with each episode either bringing a new triumph or disaster to Muranishi and his rag tag gang of employees. This gives the series a sense of forward momentum and you are never quite sure what is going to happen next.

The cast is exceptional. As well as the main cast, the series stars Lily Franky as the police officer who is constantly investigating their activities; Takenori Goto as “Rugby” and Sairi Ito as Junko, Muranishi’s hard-working assistants; Ami Tomite and Nanami Kawakami also feature, and Koyuki gives a great performance as Megumi’s mother Kayo.

The series is based on the book “Zenra Kantoku Muranishi Toru Den” (The Legend of Muranishi Toru, the Naked Director) by Nobuhiro Motohashi, and is directed by Masaharu Take, Eiji Uchida and Hayato Kawai. All three are experienced directors having worked in television or film for a number of years and it shows in the style of the series. Largely set in the eighties, they manage to capture the period feel with costumes and set-design. The soundtrack is an interesting selection of instantly recognizable and catchy western songs.

Despite being the central character, Muranishi remains something of a mystery throughout. We see only briefly the effect his wife’s affair had on him and it is hard to get a sense of what is really driving him to do what he does. In contrast, Kaoru Kuroki is much more of an open book as we see her actions as an expression of personal freedom. The pornographic industry provides an interesting focal point for discussions of personal liberty, exploitation, lust, sex, capitalism, and many other things. The series constantly shows that pornography is a business designed to make money, this is the driving motivation behind almost all of the characters. It also shows how the adult industry is often driven underground in what is a largely conservative society; the strict censorship laws and prohibitions are in stark contrast to the obvious popularity of these materials. The rights and wrongs of government interference are barely touched on. Kaoru Kuroki’s philosophy of sexual emancipation is given more time, but still more could have been done with the character.

“The Naked Director” is a fun show that smooths off most of the rough edges of its protagonist in favour of giving the audience and enjoyable comedy-drama. Excellent direction and design along with an amazing cast make for a hugely enjoyable watch.