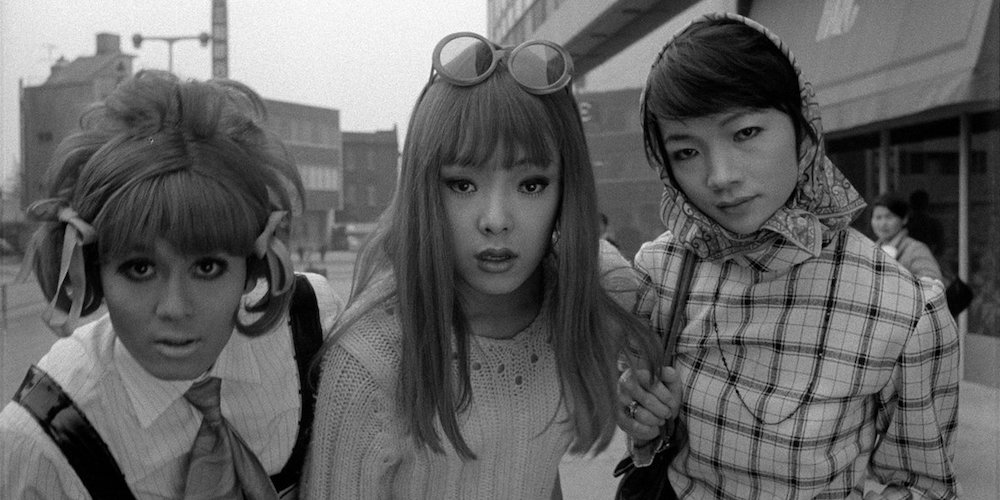 Eddie (Peter) is a transgender woman working at a gay nightclub in Tokyo. Things become complicated with drug deals being conducted at the club; and Eddie must come to terms with her childhood trauma. “Funeral Parade of Roses” is a curious film with an experimental, art-house aesthetic mixed with crime and psychological genres. The central plot, such as it is, is interspersed with flashbacks and loops back on itself continually in a mesmerising spiral as things slip out of Eddie’s control. The film breaks the fourth wall, featuring interview segments with members of the cast, to the point where the line is blurred between characters and actors. This sense of alienation from the drama is heightened with the flashes of countdowns and title cards that appear randomly. Eddie’s friends are the counter-cultural youth, whose rebellious attitudes to drugs and sexuality in a largely conservative and conformist society are something of a manifesto for the film itself. They state that there are no more boundaries to cross in film and their own films are an attempt to break through with something truly unique and revolutionary.

“Funeral Parade of Roses” was the first feature-length film of writer and director Toshio Matsumoto, who had previously worked on experimental films and short documentaries. It is an important work for its portrayal of transgender issues. The interviews with the cast/characters offer an insight into their lives and the subjects of homosexuality and transgenderism. The interviews are combative, establishing these individuals as transgressive or different, asking them their sexual preferences, whether they are truly happy, or whether they will ever return to being a ‘man’. These are representative of common views around the issues at the time, and it is interesting to see such a direct confrontation of them. This was also Peter’s first film role who gives an incredible performance as Eddie, capturing the joy of self-expression alongside their various internal struggles. Peter (stage name of Shinnosuke Ikehata) was only 17 at the time the film was released, making this performance even more incredible.

The film is loosely based on Sophocles’ “Oedipus Rex”, references to which are found in Eddie’s story, parental relationships, and the tragic denouement. However, the film delights in attempting to subvert the typical in favour of something more transgressive, perhaps even transcendental. Drug use is shown and plays a major part in the plot. We see the group of young wannabee revolutionaries in a drug-fuelled party, and hear about their experiences on marijuana. It is a film about rebellious youth that retains its power through the bizarre quick cut and achronological editing, creating a work that has its own internal logic, but drifts from conventional plot to chaotic fever dream without skipping a beat.

“Funeral Parade of Roses” is an important work for several reasons, amongst them the portrayal of counter-cultural youth in 1960’s Tokyo, the prominence of transgenderism as a theme, and the influential style that has echoes through the following decades of transgressive film. The chaotic editing, slipping from sensuous and tender scenes of love making to frenetic drug-fuelled trips, gives the sense of a film that is attempting to do something different with the art form, while being confident enough to play with the styles and genre tropes of other films. An absolute must watch for fans of film history, youth and gender issues and counter-culture. “Funeral Parade of Roses” has aged exceptionally well due to its wild energy and forward-thinking stance on many issues.