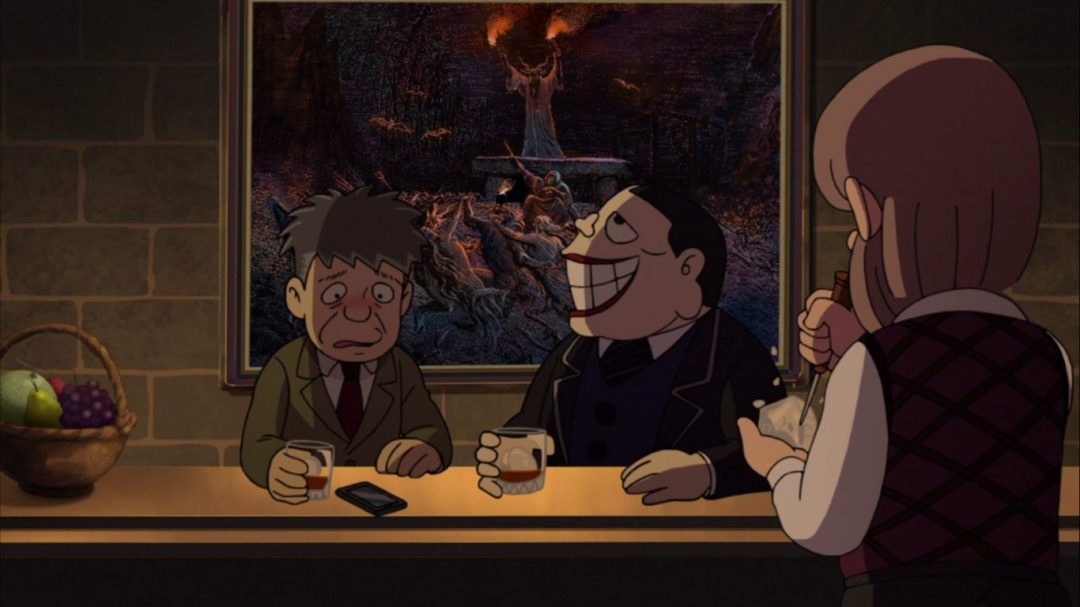 Moguro Fukuzo, as he is introduced at the beginning of every episode, is a peculiar kind of salesman; he works not for money, but only to see satisfied customers. The nature of his business is also unusual. He appears unexpectedly to offer people some sort of boon or way out of any current problem. Whether this is a stressful day job, financial worries, or other personal worries. Moguro offers to help, using some magical ability to allow them to experience happiness before suddenly removing it and bringing them crashing back to harsh reality. In fact, in every case the person usually ends up far worse than they started and Moguro heads off laughing into the sunset.

It is hard to place “The Laughing Salesman” into a particular category. Blackly comic, it has elements of moral fable and psychological horror, with the ‘clients’ being led astray to indulge in their worst vices, or else being tormented by some uncontrollable compulsion. There are a few where the message seems to be clear, such as a man berated by his boss who then becomes that same monstrous power-hungry figure when given the opportunity; or the man who wants to hide his face behind a mask and is then forced to live this second life permanently along with the negatives it entails. Others are less clear and on occasion even people with no apparent foibles are accosted by Moguro who proceeds to destroy their lives seemingly for the fun of it.

It is clear that the “Laughing Salesman” character has a lasting appeal. Beginning life as a one-shot manga titled “The Black Salesman” by Motoo Abiko (also known as Fujiko A. Fujio) in the late 1960’s, the first publisher it was sent to considered it too scary to be published. It was later turned into a long running anime series with 127 episodes. This new iteration only has 12 episodes, each split into two distinct stories, but it is enough to give a flavour of the warped world of the salesman character. The writers Naohiro Fukushima, Asami Ishikawa, Midori Natsu and Hirofumi Ogura, create an anthology series that manages to not repeat itself, with each story having a unique issue or problem within the confines of a familiar structure. The animation style leans towards exaggerated caricature, which suits the “house of mirrors” style stories that show people at their worst and bring their flaws to the fore. Each character is named ironically for a personality trait or some other personality trait.

In spite of the comedic tone there is an underlying darkness as the show seems to mock individuals for their hope of a better world. The character of Moguro himself may be a reference to the devil tempting people to sin, or else simply causing chaos in the world. One of the darkest elements of the show sees Moguro take each of his clients/victims to a bar named the Magic Nest. Here they sit, the same barman continuously polishing glasses, while behind them on the wall is a terrifying painting depicting a hellscape, with a Baphomet triumphant above a crowd of lost souls. It leads the viewer to think that there may be more going on thematically than simply an eccentric character causing mischief.

“The Laughing Salesman” is a show that brings into sharp relief some of the worst elements of society, such as selfishness, greed, workplace harassment, and also popular vices such as money, women or drink. It doesn’t offer easy answers, in fact Moguro tends to make everything much worse. Instead it forces the viewer to confront the issues by deliberately muddying the waters into a moral maze from which there may be no escape. The characters are rarely heroes, and Moguro is certainly not swooping in to save them. Well worth watching if you enjoy dark fantastical fables.