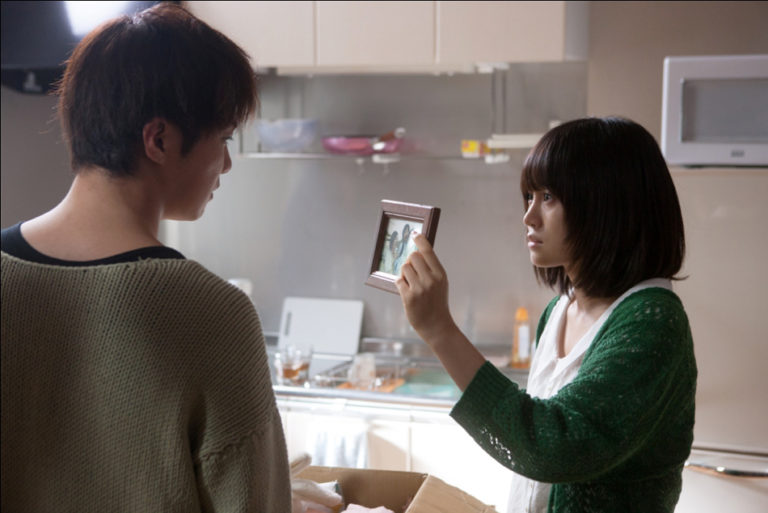 Atsuko Maeda has restless spirits to contend with in this horror from “Ring” director Hideo Nakata. Asuka Ninomiya (Maeda) has just moved to a decrepit apartment block with her parents and younger brother, Satoshi (Ruiki Sato). The reclusive neighbour begins to take on a terrifying aspect when Asuka hears scratching on the other side of the wall at night. She also meets a lonely boy playing in a nearby park, named Minoru (Kanau Tanaka). Asuka’s strange experience grow even stranger as she begins to suffer from déjà vu and learns that the apartment may be haunted.

Director Hideo Nakata knows just how to build tension from the smallest incident. Everything from the flickering lightbulb outside the apartment and the scratching on the wall,, create a sense that something is slightly off. The script by Junya Kato and Ryuka Miyake blends traditional ghost house aesthetic, with the setting of an old rust-stained apartment block, and psychological terror as we are not sure what Asuka’s experiences really mean. There are moments in the film that are genuinely terrifying without the need for excessive gore or violence, the slow turn of a head, or the sudden cut to the following scene. The use of lighting and colour is also noteworthy, particularly in the later half as it is used more dramatically. This use of simple techniques, rather than the need for outrageous effects, helps the film develop natural scares. Unfortunately, this is undermined somewhat later in the film with a couple of moments that are almost parodic in their excessive attempts to shock. The story also devolves as things progress, beginning as an interesting ghost story with a psychological angle, it seems that too much is expected of it later on and it starts to break apart slightly. Mostly the plot-holes and weaknesses in the story are counterbalanced by the fantastic horror elements, which may not be original but are nevertheless handled expertly.

As with Nakata’s previous work “Dark Water”, “The Complex” breaks down the ghost story and attempts to weave through it something with emotional depth. Ideas of an afterlife and restless spirits are interwoven with themes of survivor guilt and regret. Similar to “Reincarnation” (2005) by Takashi Shimizu, the film becomes an exploration of Asuka’s psyche as she deals with the trauma of her past. The appearance of Minoru seems to be an element that is somewhat misplaced as his story doesn’t tie in exactly with either of the protagonists. It feels a little like a separate film has intruded, one about vengeful demons and infernal punishment. An intriguing horror that lacks a little of the depth of Nakata’s earlier works, but nevertheless delivers its fair share of chills.