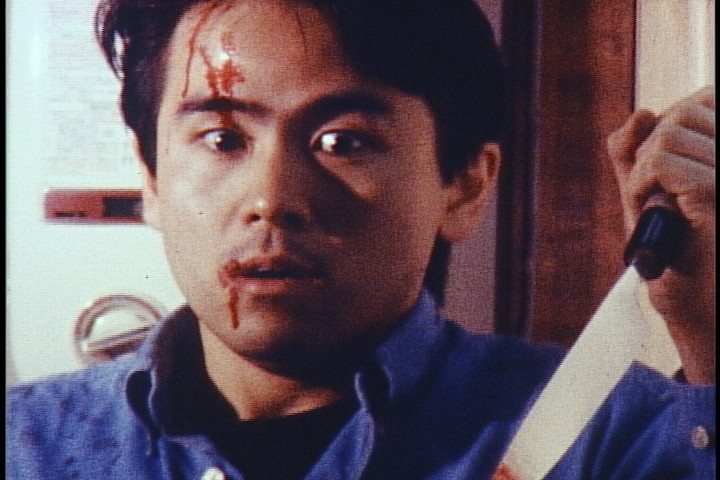 Bodybuilder Shinji (Shinichi Fukazawa), his ex-girlfriend (Asako Nosaka), and a psychic (Masaaki Kai) enter a haunted apartment in this low-budget splatter horror. 30 years after his father’s death, killed by an angry girlfriend, Shinji and the others head there, led by his ex-girlfriend who is investigating the paranormal. Not long after arriving they disturb the ghost of his father’s vengeful lover and are forced to do battle with the evil spirit. This film apparently had a long production period, with filming beginning in 1995 and editing in 2005.

Written and directed by star Shinichi Fukazawa, the film’s shoestring budget give it a homemade charm, with shaky physical effects, blood spatter, and dodgy CG, creating a wacky, over-the-top tone that is more comedic that terrifying. The film is firmly tongue-in-cheek, the bodybuilding protagonist reminiscent of typical action hero types, and the surreal slapstick of much of the story and the effects raises a few smiles. Moments such as the heroes being unable to burn a corpse because one recently quit smoking on the advice of the other; or severed limbs attacking independent of a body, all play into the blackly humour tone The film is shot on grainy film stock that also adds to the feel of a throwback horror. The apartment setting does lend a claustrophobic attitude and ensures things keep moving. A a little over an hour in length there is no time to rest as the trio attempt to fight their way to safety. There are rarely moments of respite given they are never more than a room away from a demonic spirit. If you are a fan of silly low-budget splatter films then this does the job, with an outrageous premise and some fun effects work.