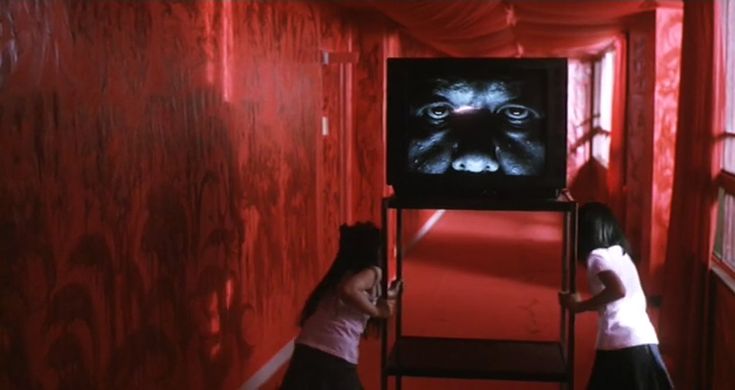 A twisted horror story about incest, rape, trauma and revenge. 12 year old Mitsuko is forced into a cello case by her father and made to watch him have sex with her mother. He later begins abusing his own daughter. When her mother becomes aware of this it leads to a breakdown in their relationship. Mitsuko begins to believe they are in some respect switching places, with her taking the place of her mother. After she pushes her down the stairs and kills her things get even more bizarre. We are then introduced to Taeko, a woman who is writing the story we have until this point being watching. It is clear that Taeko is also somewhat disturbed. The film suggests that this may be the grown-up Mitsuko, or a version of her shattered psyche (both are played by the same actress). As the plot unfolds we are confronted with several horrifying revelations.

Director Sion Sono is no stranger to gory horror and sexual violence. Though you get the sense here, as in other films (Suicide Club, Noriko’s Dinner Table), that the shocks are far from gratuitous, instead serving to emphasise much deeper and more terrifying themes. The opening scene of the film takes place in a cabaret club with all manner of bizarre characters. It is a metaphysical space of nightmares with a carnival atmosphere, part burlesque, part house of horrors. A guillotine is brought onto the stage and a willing volunteer for decapitation coaxed from the audience. This is Mitsuko. This opening is a perfect example of Sono’s unconventional style of storytelling. Not everything that happens in the film is to be taken too literally. Instead he would rather you focus on the emotional content, finding truth and significance beyond the merely factual. In its closing scenes the film, until that point a dizzying spiral of insanity, does tie everything neatly together in some regard, but leaves room for interpretation. The intercuts to the Ferris Wheel, Mitsuko’s school walls morphing into bloody flesh, and the blurring of the lines between various characters, help to give the film a sense of paranoia and uneasiness that is in keeping with the protagonists own feelings. This is a film that succeeds in making you feel disgusted at what is being perpetrated on these women. The music is likewise a creepy, lilting carnival score, with the off-key blast of accordion further enhancing the unsettling atmosphere. The actors all do a magnificent job, especially Masumi Miyazaki as Mitsuko and Taeko.

Strange Circus is a film that deals with themes of incest and sexual violence. It is an experiential film in places. That is to say its intent is to make you fully empathise with the characters sense of repulsion, isolation and confusion. You are meant to feel as Mitsuko feels, that her abuse is at once incomprehensible but undeniably grotesque. Her view of the world is completely distorted by what she endured and as the film progresses you realise that both Mitsuko and Taeko are unreliable narrators. I would definitely recommend the film for fans of Sion Sono’s other horror films, with much the same aesthetic and themes here.