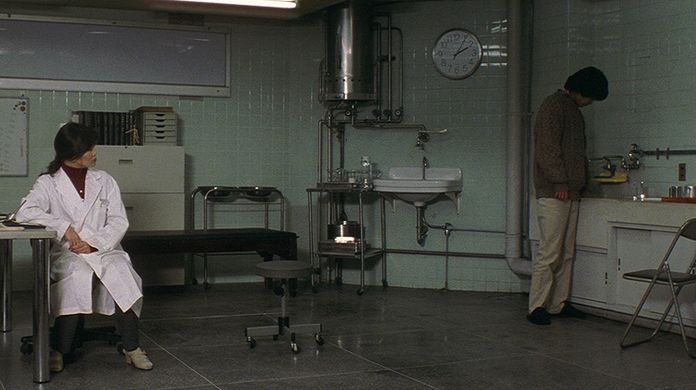 Detective Takage (Koji Yakusho) is investigating a mysterious string of murders. Despite the killers having no personal connection to one another, each crime displays an eerie similarity. The murderers all claim personal responsibility, but are unable to answer questioning about the circumstances of the incidents. All cut an X into their victims throat. Takage soon comes face to face with a former psychology student known as Mamiya (Masato Hagiwara) who seems to be hypnotising these individuals into committing murder. Mamiya is unable or unwilling to answer questions, apparently suffering from amnesia, and instead insists on questioning his interrogators. Takage’s wife (Anna Nakagawa) is suffering from a form of dementia and his frustrations with his wife’s illness seem to spill over into anger at Mamiya’s crimes.

“Cure” styles itself as a detective drama with strong horror elements, though never quite gives itself over entirely to the tropes of genre cinema. Writer director Kiyoshi Kurosawa does a fantastic job of creating tension and much of the horror remains psychological, with no clear motivation established for Mamiya’s actions. The settings of decrepit hospital buildings and crumbling city streets help to build the sense that everything is falling apart, mirroring Takage’s mental deterioration. A flickering light in an underpass, abandoned buildings, and suburban decay augment the imperfections of humanity that the film explores. Kurosawa weaves together the story of the killer and the detective in an interesting way, with Takage’s suffering and quest for understanding becoming an unjust mockery when compared to Mamiya’s cold detachment and lack of responsibility. Kurosawa manages to give the audience enough hints to keep the mystery engaging while never fully letting us into its most tempting secrets. In the final scenes of the film this lack of a complete picture makes for a uniquely terrifying experience. Koji Yakusho plays Takage as the world-weary detective, weighed down by personal struggle as well as the seriousness of his professional duty. Masato Hagiwara engenders feelings of hatred and anger, with Mamiya’s lack of social grace, impertinence and dead-eyed psychopathy getting under the skin in a way that is irritating and makes Takage sympathetic. Tsuyoshi Ujiki plays Takage’s psychologist friend Sakuma and is a good balance to Takage’s seriousness. Likewise, Anna Nakagawa’s role is small but pivotal in understanding Takage, and she gives a sympathetic portrayal of a character with their own mental health issues.

The horror of “Cure” is not in the violence of the murders, which are shown as terrifyingly commonplace, nor gory effects, which are used sparingly, but in allowing us to confront our own lack of comprehension when it comes to such things. Detective Takage states early on that he wants to find the words to describe what is happening. His ultimate realisation that some things are inexplicable is more horrifying than a serial killer with a well-documented backstory. The film’s ending leave both Takage and Mamiya’s thoughts and morality ambiguous. The credits, with partially broken and missing names, give a hint that this ambiguity is intentional. Life is imperfect, humanity is imperfect, and attempts to create meaning may be futile. Death and madness are natural, and by contrast rationalising such things may prove to be ironically irrational. Throughout the film explanations for the murders range from demonic possession to hypnotism and psychosis, but the film leaves the audience with this fundamental questions unanswered. We are left to speculate on the causes of crime and the reason for suffering in the world, and led to an increasingly distressing conclusion. “Cure” is a thrilling drama that will appeal to any fans of thought-provoking horror or detective dramas with a psychological twist.