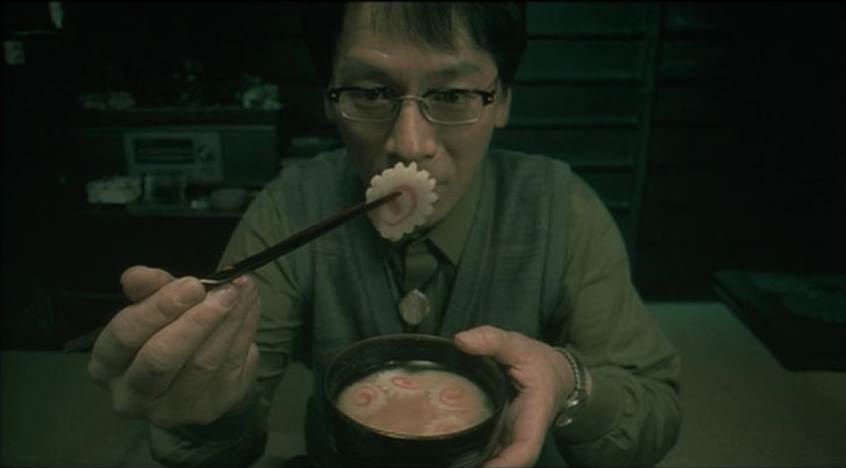 As Kirie (Eriko Hatsune) is on her way to school she notices her friend Shuichi’s father apparently fixated on the spiral pattern of a snail shell. The man’s interest in spirals soon becomes an obsession and Kirie begins to see other occurrences of this phenomenon. At first thinking it a ridiculous oddity, she soon becomes worried and terror begins to set in when several people die in gruesome circumstances related to the spiral pattern.

“Spiral” is based on the manga “Uzumaki” by horror master Junji Ito, with a screenplay by Takao Niita. Director Higuchinsky creates a strange and disturbing experience that blends several genres, from blackly comic thrills to grotesque body horror, to the psychological terror of avant-garde arthouse films. The cinematography by Gen Kobayashi is in a washed out tone that heightens the sense of unreality. The film feels staged or dated in a way that is unsettling, almost as though it is happening in a parallel world where everything is ever so slightly off-kilter. The story is compelling, despite the unbelievable premise, and the grotesque nature of the deaths is genuinely shocking. The script is simple yet effective in showing everything but explaining nothing, leaving the meaning entirely up to the imagination of the viewer. Eriko Hatsune as Kirie and Fhi Fan as Shuichi, are charismatic and do a great job with the material, playing things completely straight throughout increasingly bizarre occurrences. Keiichi Suzuki and Tetsuro Kashibuchi create a score that complements the odd, dreamlike sensibilities of the story, limping from comic accompaniment to dark oppressive tones.

The film’s strength lies in never fully explaining what is happening, or why, with several possible interpretations swirling around. The spirals provoke a dangerous obsession in those who are afflicted and this is the most simplistic reading of the plot: as a straightforward morality tale on the dangers of obsession causing people to lose sight of their lives and become so consumed that it finally kills them. There is also a darker reading related to mental health issues, particularly depression and anxiety leading to a decent into an increasingly troubling, pessimistic, and all-consuming world view. The idea of the spiral, particularly a downward spiral, bring to mind primal fears such as these, and for this reason the film grows more unsettling when picking apart the potential themes. This will appeal to fans of over-the-top horror and psychological horror alike, with a unique story that draws you in to contemplating the significance of the spirals along with the characters.