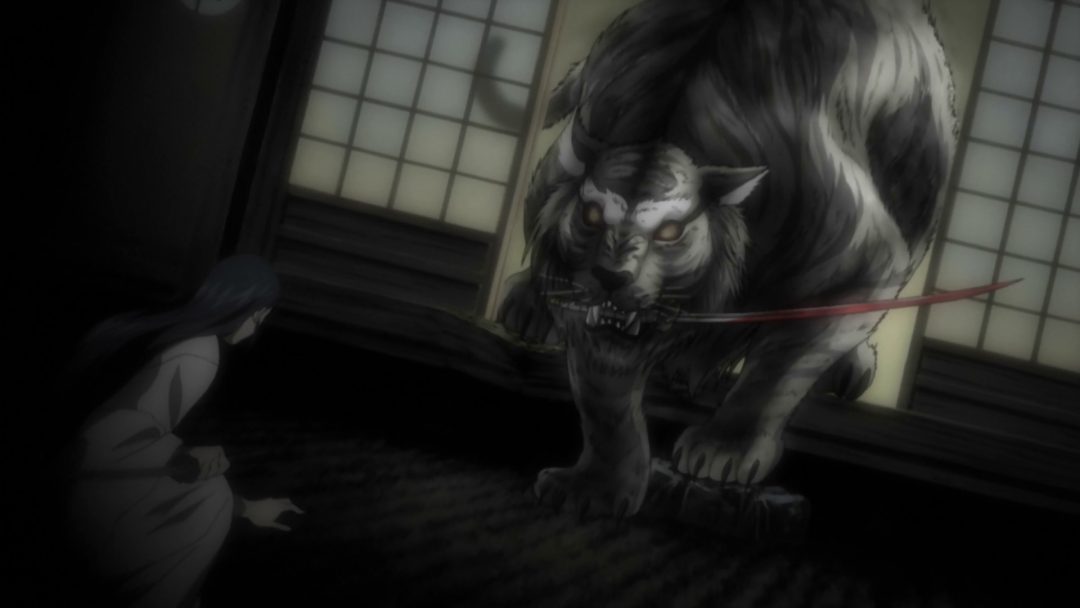 Based on the manga by Takayuki Yamaguchi, “Shigurui” covers the first six and a half volumes (32 chapters) of the series. The story begins as a martial arts tournament is arranged by Daimyo Tokugawa Tadanaga, in which, contrary to custom, combatants fight with live blades making it a fatal competition. The first two duellists we see are Gennosuke Fujiki (Daisuke Namikawa) and Seigen Irako (Nozomu Sasaki), who we learn have a complex history together. The story then takes us back a number of years to Fujiki as he trains at the Iwamata dojo in the Kogan style. He is challenged by newcomer Irako, who seems determined to injure him in a practice bout, something that is frowned upon. Their rivalry is fierce and threatens the future of the Kogan school as the senile master Kogan (Seizo Kato) must choose his successor from between them. The story also gives us an insight into several other characters, including Kogan’s concubine, Iku (Emi Shinohara), who begins an affair with Irako, and daughter, Mie (Hoko Kuwashima).

Written by Seishi Minakami and directed by Hiroshi Hamasaki, “Shigurui” is a unique viewing experience. The art and animation style are heavily inspired by the manga, often lingering on a single frame or image and allowing you to savour the detail. The subdued and limited colour palette further impress upon the viewer the stylized look and the score by Kiyoshi Yoshida, with traditional instruments and the shrill cries of cicadas, further heighten the historic feel of the drama. It is almost like seeing a traditional painting come to life. The story itself is packed with incident and characters whose personal stories are engaging. However, it can be a demanding show to watch, requiring a great deal of attention as to what is going on. This is not because the plot is overly convoluted or complex, but due to the way that the story is presented. It will often use expressionistic imagery, such as showing the musculature of the fighters, or visual metaphors such as cicadas, cracked jugs, flowers among them, to explain what is going on. A keen eye and some unpicking of the symbolism are required to follow the plot completely. This creative technique lends the show an emotional and psychological depth as it allows us to look past the mechanics of plot to a deeper understanding of its significance. One of the ways the show excels is in its use of pacing and foreshadowing to create a deeply unsettling tension. We are made aware early on that this is a world where a brutal death can come to anyone in an instant through lingering imagery or sequences that presage the coming violence by showing a sudden flash of possible futures. The swordfighting is unflashy, instead often relying on a single fatal strike. Therefore, we often see samurai facing off against one another, the knowledge that any cut could be their last, frozen in anticipation of the bloodshed to follow.

Historical dramas often allow for an exploration of humanity’s basest instincts and “Shigurui” exemplifies this perfectly. The two constants in the show are sex and death, Eros and Thanatos, at heart the drive to creation and destruction between which humans are destined to struggle. The samurai code of honour is shown to be little more than an expression of the idea that “might makes right” or that strength is the only virtue of importance. Kogan is a deeply flawed character, suffering from dementia, he is driven by violent and lustful urges and jealousy. Likewise, Irako is a man who is determined to rise to the top and that means remorselessly destroying anyone in his path. The deferential relationship between the members of the Kogan school and their master highlights the flaws in this system as they are forced to follow orders that cause increasing death and suffering. While Fujiki is the hero of the narrative, he lacks the freedom of spirit and drive to succeed as Irako does, being comfortable with his position and never attempting to upset the status quo. Fans of historical dramas will find a lot to enjoy in “Shigurui”, with its excellent depictions of its period setting, the poetry and the viciousness of the age brought to the fore.