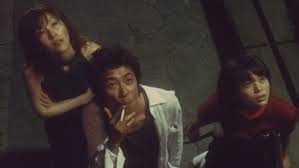 Miyako (Kumiko Aso) works as a call-girl, living with her friend Sakiko (Tsugumi Otake) with whom she shares a bond that hovers over the border of sisterhood and life partners. After encountering a client, Shintani (Masatoshi Nagase), with whom Miyako experiences sexual pleasure for the first time in her life, the two women begin to drift apart. Miyako suggests that Shintani should sleep with Sakiko, an event that draws the three into a love triangle in which their various flaws and anxieties are reflected.

“Luxurious Bone” begins with poetic sentiments being recited over the credits, followed by bones being removed from a crematorium furnace. This proves to be an apt set up for a film that is both artistic, meaning glimpsed through fragments of character and story, and with an underlying melancholy. Written by director Isao Yukisada and screenwriter Shoichi Masahiko, the story is relatively straightforward, revolving around the three main characters and their complicated relationship, and the film expects the audience to be familiar with these archetypes, rarely delving too deeply into their backgrounds. Many things are left unsaid, or rather left to viewer interpretation, with direction, lighting and cinematography often standing in for dialogue. Sakiko’s broken leg, the phantom bone that seems permanently lodged in Mayuko’s throat, or the three goldfish confined to a blender, are all clues to what is happening internally with the characters. The performances of Aso, Otake and Nagase are exceptional, with very few supporting characters they manage to keep the audience’s attention with their portrayals of these complex characters. Miyako has resigned herself to a life of prostitution to support Sakiko, while longing for something more. Shintani is perhaps the most mysterious, perhaps intended simply as a catalyst between Miyako and Sakiko, but with shocking moments that indicate a more conflicted character. Sakiko is the most sympathetic and we learn most about her, but many things are never satisfactorily resolved, a common theme across the film.

The film asks a lot of its audience, rarely stating its intentions clearly. It is for the viewer to piece together what is happening with the characters through a fore-knowledge of typical romantic stories, and the various visual clues presented. There are themes of the relationship between sex and love, with a clear distinction between Miyako’s work as a call-girl, which gives her no pleasure either physically or emotionally, and her relationship with Sakiko, which operates on a deeper level. There is also the peculiar idea that Miyako wants to reach Sakiko, to create a bond with her, through Shintani, using a surrogate lover to connect the two women. The film’s occassional graphic eroticism and brief flash of fish-based gore, may seem out of place in a film that appears quite tame on the surface, but that would be to misunderstand the depth of feeling that is raging behind the characters. A curious romantic drama that plays on themes of human connection and the difficulty in expressing our feelings clearly.