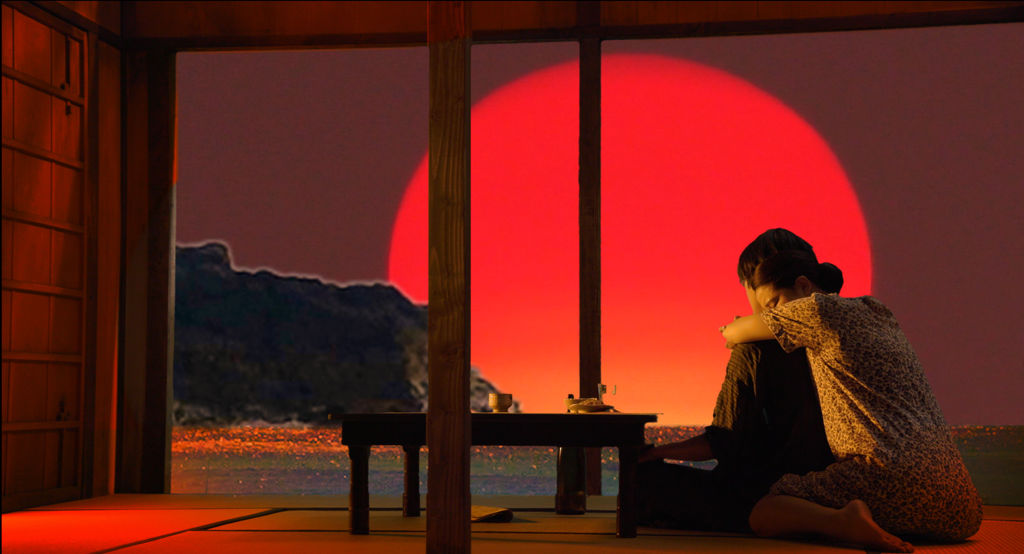 Labyrinth of Cinema (2019) by Nobuhiko Obayashi

At a seaside cinema, local residents gather for the final night of their closing down film festival to watch a showing of several war films. Among the patrons are three young men, film fanatic Mario (Takuro Atsuki), history buff Hosuke (Takahito Hosoyamada), and a young gang member Shigeru (Yoshihiko Hosoda), as well as a mysterious young girl name Noriko (Rei Yoshida). Also present is a man who has recently arrived from a spaceship, Fanta G. (Yukihiro Takahashi) (You didn’t think an Obayashi film would be that straightforward, did you?). When a lightning storm strikes, the three young men find themselves transported into the films with Noriko, who they swear to protect from the violence raging around them. What follows is a journey through Japanese military and literary history as they travel from old black-and-white samurai films through the action-packed Second World War epics, and later to that fateful day in 1945 when the atomic bomb was dropped on Hiroshima.

From the off it is clear that Obayashi (House, Hanagatami) intends to create something that is not so much a film as a monument to the past, a celebration of cinema, and a stirring political screed. Fanta G. sets the tone early on as he tells us about certain historical events from his objective fourth-wall breaking perspective. Throughout the film text appears on screen to give historical details, and at times “Labyrinth of Cinema” feels more like a history lesson or documentary than a conventional narrative. That is not to say that it is boring. By having the three young men travel into the films we are given not only the filmic version of historical events, but their modern take on them, along with explanations of the real history. Obayashi employs his familiar collage approach to film-making, with abundant use of blue screen, frenetic camera direction, brightly coloured scenes, and this hand-made, stitched together look gives everything a unique charm. The framing device of the three men being drawn into the films gives some sense of structure, but for the most part it is a more experiential approach. It can be confusing, with the characters jumping back and forth through time periods, in and out of the films they are watching, and at a certain point you have to give up attempting to make logical sense of it and just let it wash over you like a mesmeric psychedelic phantasmagoria. The film can be moving when it needs to be, particularly as it moves towards the tragedy of Hiroshima, building tension through the cumulation of these various historical tragedies. The main cast do a great job with the unconventional material, charismatic enough to hold their own against the frenetic camerawork and colourful visuals. The large supporting cast includes film directors Isshin Inudo and Makoto Tezuka, and Tadanobu Asano among others, again giving the film a collaborative feel that draws you in with the enthusiasm all involved clearly have for cinema.

Obayashi is a lifelong anti-war auteur and film fanatic and “Labyrinth of Cinema” is a poignant tribute to war films, highlighting the virtues expressed in them, and the joy of gung-ho action, whilst condemning the terrible atrocities that were committed. Film lovers can luxuriate in this three-hour epic which captures that experience of being completely enraptured in a film. Obayashi’s love of cinema shines through, as well as his conviction that art has the power to change the world. The character of Noriko at first seems like a heroine that these brave men are trying to rescue. However, as things progress and we see her in each time period, we learn that she signifies much more. Her name, it is explained, means “Child of Hope”, and it is this hope that the protagonists are trying to protect; they are fighting to maintain their own innocence in the face of centuries of war and horrors. The hope that the next generation of children will not fall prey to the same violent tendencies that marred the past. The film is also strewn with the poems of Chuya Nakashima, further emphasising the contrast between the beauty of creation through art, with the terrible destructive consequences of war. The length and arthouse style typical of Obayashi’s oeuvre are here used to deliver a powerful experience that sheds light on the history of film, warfare and humanity’s contradictory nature in its propensity towards both violence and hope.