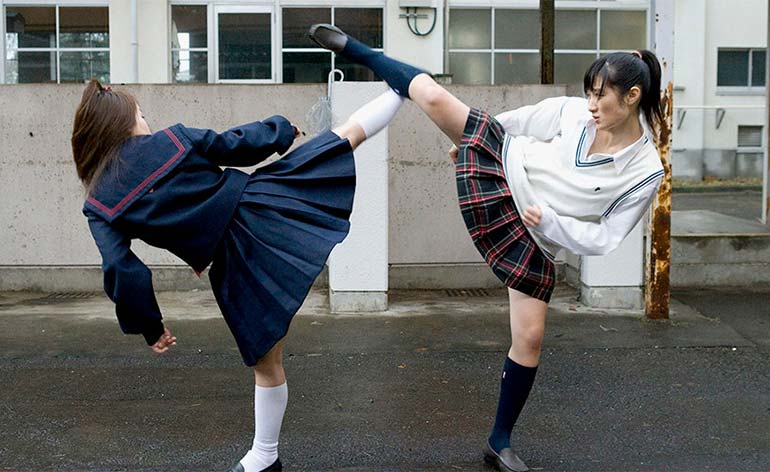 Karate black belt Rina Takeda stars in her first film, giving her a chance to show off her martial arts prowess. Kei Tsuchiya (Takeda) is a brown belt karate student who desperately wants to obtain a black belt. She starts fights with a number of black belts, trouncing them easily with her superior abilities. Despite this her sensei Matsumura (fellow karate master Tatsuya Naka) will not acquiesce to raise her to a higher level. When her friend Ryosuke (Ryuki Takahashi) is kidnapped by a group of criminal martial artists known as the Destroyers, a group Kei had previously wanted to join, she is drawn into a long-standing grudge between the group and her sensei, who embarrassed their leader by defeating him 15 years before.

“High Kick Girl” is a film in the loosest sense of the word. The story is paper thin and full of holes, exisiting only to give the most tenuous of reasons for these characters to fight one another. There is little in the way of tension or emotional connection to anything going on. The microbudget is evidenced in everything from the title sequences, with fairly rote drone footage of the city, to the small number of locations and limited costumes or set dressing. With the negatives out of the way, there are still things to enjoy in this martial arts flick for fans of karate and top notch fight choreography. Rina Takeda and Ryuki Takahashi are incredibly skilled practitioners of their styles and the film also features a number of other talented performers who put their all into making the fights thrilling and believable. The choreography is incredibly well done and, unlike other action films, the direction allows us to appreciate every movement. Shot simply with handheld cameras that do not cut away, the actors do not pull their punches (or kicks), which leads to some surprising moments that make you wonder what health and safety they had on set. The stunt work, with moments such as Rei being pummeled through a table, make it easy to forgive the lack of plot. The film will often have a slow motion replay of such stunts or particular moments of the fight sequences, which give the whole thing the feel of a clip reel to show off what they can do rather than attempting to build a believable story. Many of these moments are again repeated during the end credits, which seems unnecessary as that is the third or fourth time you will have seen some of them.

The weak plot and characterisations are perhaps forgiveable in a film where the focus will understandably be on the incredible stunts and fight work. However, there should be a few points deducted even taking the film on its own terms. Firstly, the character of Kei becomes sidelined in the second half, as focus shifts to Matsumura. While it is great to see Naka’s fight work, it detracts from the title character and the little plot that has been developed up until then. Secondly, it would have been interesting to see more varied locations and more distinction between the fighting styles, perhaps even some situational advantages. One of the best scenes takes place in a more cluttered room where we do see them interact more with the environment. While we do get nunchucks, knives, staffs and chains, the character of Shurei (played by MMA kickboxer Hisae Watanabe) feels underused. For the casual viewer it may be hard to see any significant difference between all the punching and kicking going on, but no doubt those with some knowledge will find more enjoyment in watching. “High Kick Girl” will appeal to fans of martial arts and fight scenes, with undeniably incredible action sequences helped by genuinely talented fighters, but there is little here in the way of a compelling story or characters.