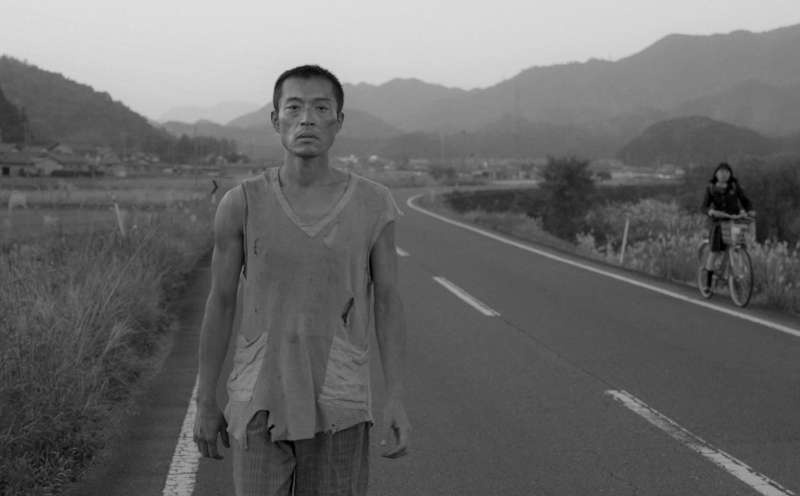 Sora (Wan Marui) comes home one day to find her grandfather has passed away. In front of him is a box of mementos, flight cap and goggles, and a war diary from his younger years. After reading an entry in the diary about a “metal arm” that he buried, Sora sets out to find it, keeping the secret from her father (Takuzo Shimizu). At the same time, a silent man who walks backwards (Hidemasa Mase) appears in their rural town. When Sora’s father hits him with the car, the two become involved with this figure, inviting him to their home, by turns caring and frustrated by his peculiar behaviour.

“Kontora” is a beautiful film, the stunning black and white cinematography perfectly capturing the philosophic nature of the story and mirroring its thematic depth. Writer-director Anshul Chauhan displays an influences from great cinematic works of the past, using the camera and staging to tell the story visually, while also creating a unique voice through the unusual, partly surreal, story. The camerawork in particular is exceptional, drawing us in to the characters by mimicing their motion, or literally following them as a subtle yet omnipresent observer. The rural setting of the film is shown off to its best advantage, the broad farmland, forest paths, and the tangled electrical cables and bustle of the town itself, representing something static and tangible, as opposed to the transient lives of the human protagonists. The existential themes, dealing with death and the forgotten stories of those who have passed, are reflected in the passing mists on the mountains, and in the interplay of light and shadow. The film leans into this expressionistic tone, with much of the story happening quietly and unspoken. The sometimes fantastical, abstract nature of the narrative, typified by the backwards-walking man, is occasionally punctuated by heartwrenchingly human and emotional scenes, such as when Sora allows her emotions to flow freely, or in her father’s disgust at his cousin’s coldhearted focus on money, giving them no time to grieve. The performances of Wan Marui as Sora and Takuzo Shimizu as her father are excellent, capturing the a complexity of their character’s conflicting emotions following their bereavement. The soundtrack by Yuma Koda adds elements of mystery, wonder, and suspense, complementing the often surprising narrative twists of the story. The film does require a lot of its audience, with long takes and contemplative story that leaves much unsaid, but the metaphors are far from impermeable and for those willing to spare a little time there is much to appreciate.

The most intriguing element of the story soon comes to be the backward-walking man, who appears shortly after Sora’s grandfather’s death. This mystery is further heightened by his inability to communicate, leading to frustration from Sora’s father, and increased curiosity from Sora. The man symbolises the lost memories of Sora’s grandfather, his backward walking representing a walk backwards through time, retreading of the past, and his inability to speak reflective of our relationship with the dead. They cannot speak to us, or tell us their stories, which can lead to curiosity or frustration, a desire to know more or an irritation at things left unsaid. As Sora and her father struggle to understand this person, they are similarly struggling to come to terms with the now vanished and voiceless past of their father and grandfather. It is a clever way to represent our relationship with time and mortality that leaves room for interpretation. A unique and interesting drama, poignant and engaging, with nuanced performances and excellent cinematography.