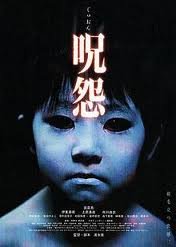 Home-carer Rika is assigned to an old lady, Sachie, in suburban Tokyo. On arriving at the house she finds the lady motionless and soon becomes aware of an evil presence in the house. She finds a deathly pale young boy, Toshio and later witnesses a dark figure hovering above Sachie. The film then cuts back to show the events of Sachie’s son and his wife, who died under mysterious circumstances. It seems there is a curse on this house brought about by an earlier murder of a mother at the hands of her husband. The house is now haunted by the ghosts of Kayako, the mother, and Toshio, her young son who went missing and those who enter are destined to be haunted and killed by the curse. The detective who investigated the original case, Toyama, is brought back to try to explain. And his daughter Izumi who sneaked into the house with her classmates also becomes a victim.

The story unfolds through a number of chapters detailing the various experiences of the characters, Rika, Hitomi (Sachie’s daughter), Toyama and Izumi as well as other minor characters. This chaptered approach keeps the film moving along, feeling more like a compilation of short stories building on a central idea. It can be hard to work out who is who and what order the stories are taking place as the time-line is non-linear. The film is not as scary as it’s reputation might lead you to believe, instead building an air of quiet unease and growing terror. The scares are largely one of a kind, i.e. either Kayako or Toshio being glimpsed in the background, or appearing suddenly.  It is very well shot and the music really adds to the sense of creeping dread. It is a great example of how to direct low-budget horror, as most of the fear is produced through very simple camera movements or positioning.

This film is a cinematographic representation of an old-fashioned ghost story. From the look of Kayako and her son -pale white, lank black hair and white-less eyes -to scenes which are reminiscent of old Kabuki theatre (people being pulled backwards off-stage) it is  interesting as a glimpse at a traditional ghost story being modernised and set in a claustrophobic suburban house.