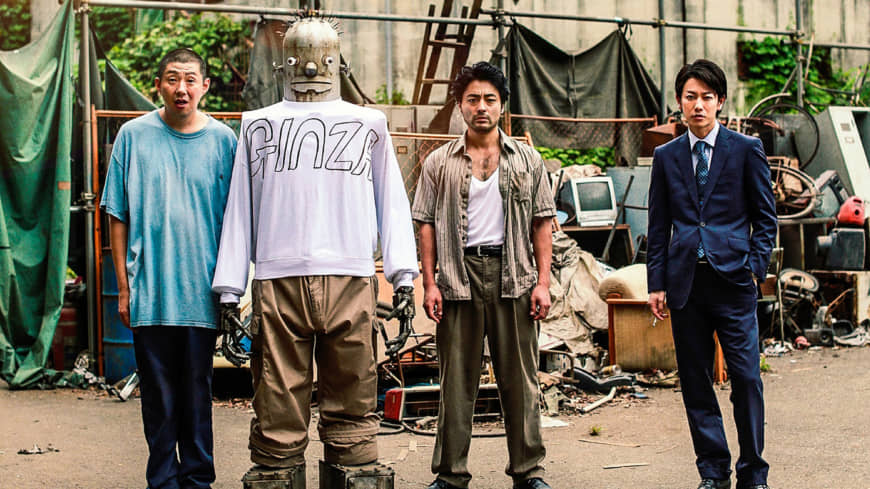 Two men working a meaningless job find a high-tech AI robot in this existential comedy-drama. Unlike his younger brother Sakon (Takeru Sato) who is a high-flying professional, Ukon (Takayuki Yamada) is stuck in a rut. Along with his simple-minded friend Ushiyama (Yoshiyoshi Arakawa), he finds work with an elderly man who is part of some right-wing political group. This man and his assistant Mizunami (Suon Kan) have the two digging in a tunnel for gold that may or may not exist. One night Ushiyama finds a robot under the abandoned factory where he is sleeping that may provide a solution to their current troubles, but at the same time brings difficulties of its own.

Directed by Nobuhiro Yamashita, with a screenplay by Kosuke Mukai, this manga adaptation is a film that includes many disparate elements that never quite come together in a satisfactory way. The lowbrow comedy, such as Ukon’s attempts to help the naïve Ushiyama lose his virginity; or their attempts to hide the robot from prying eyes are amusing; but the film also seems to be striving to be more than a simple knockabout comedy, undermining the potential for more serious discussions with the more outrageous moments. Ukon and Ushiyama’s relationship is touching, being almost surrogate siblings to one another. Takayuki Yamada and Yoshiyoshi Arakawa are perfectly cast as this odd couple, Yamada as a dissatisfied individual who is striving to find some purpose in life, and Arakawa as the childlike, semi-mute, vulnerable Ushiyama. The film begins to find its feet after the discovery of the robot, giving the characters a unique situation to deal with, but at the same time it is unclear what the science-fiction element adds to the narrative.

“Hard-Core” is at its best when focussed on the relationship between the two protagonists, and the comparisons between them and their robotic companion. There is a lingering sense of existential angst in the film, with the shot of a dead cicada bringing home this idea that life is fragile and transient. There is also a strong desire in the character of Ukon to find meaning in his life. At the beginning of the film we see he is a man who is disgusted by humanity, lashing out at people enjoying themselves while he drinks himself into a stupor. Both Ushiyama and the robot, in contrast, are blissfully ignorant of the world around them, rarely troubled by concerns beyond the here and now. As Ukon’s brother explains to him, the robot has no will or desires, it does what it does because it is told to. It is the tragedy of humans that they are searching for meaning in a meaningless world. In the same way that they are digging for gold and Mizunuma’s daughter Taeko (Kei Ishibashi) is searching for physical pleasure, to the exclusion of all else. “Hard-Core” is an unusual film because it attempts to juggle so many genres, action, romance, existential drama, comedy, and science-fiction, and often seems to drift aimlessly from one to the other. Much like the journey of the protagonist, it is often hard to discern a deeper meaning amidst the madness.