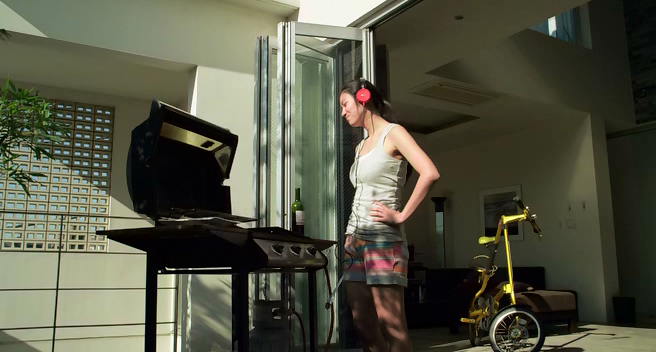 Nami is a young girl who lives at home with her elder sister and her parents. Her mother is obsessed with giving money to overseas charities and one day decides to leave the family and travel to help these suffering children in person. This leads to Nami’s father taking up with a mistress, who eventually leaves and her father commits suicide. Nami’s sister also leaves home to go and live with a boyfriend. Nami’s only companion seems to be the television, and in particular a sales channel from which she purchases various items. Years later, living off her inheritance from her father, Nami has taken up watching other lonely individuals. From her vantage point on the roof she spies with binoculars or telescope these people who seem set on a path of solitude. She also follows them around the city, noting down their activities in a diary and is excited to discover a new “solitarian”. Her behaviour is charmingly eccentric, but takes a dark turn when she enters a man’s home and is delighted to find him dead, taking a photo with the corpse. She then discovers another lonely man, whom she begins stalking, camping out nearby his house. When this man begins to reconnect with the world, first with Christian community volunteers, and then with his own family, Nami takes matters into her own hands to ensure that he remains alone.

Directed by Eiji Uchida, “Greatful Dead” with a screenplay by Uchida and Estuo Hiratani is a film of two quite distinct halves, that seem stitched together down the middle. The early part of the film where we see the young Nami ignored and eventually abandoned by her parents, is a tragic portrayal of a neglected child. This segment also gives us a hint at later developments when she unexpectedly cracks a mop around a classmates head. The film then moves into a lighthearted comedy, complete with bouncy music, and a joyful Nami cataloguing all the lonely people she sees around the city. The second half of the film moves into dark horror and doesn’t hold back on the violence and gory sequences. However, both parts bleed into one another. There are elements of dark humour in the first half, and slapstick in the second. Kumi Takeuchi manages both parts exceptionally, being likeable and fun and shifting gear into creepy and terrifying later. Even when it is clear she is beyond helping, she still manages to evoke a degree of sympathy and is a joy to watch. Takashi Sasano, who plays her elderly stalking victim, likewise goes through a transformation, from irritable old man to a kindly grandpa and later to a victimised person who has had enough.

The film explores loneliness and isolation in a tongue-in-cheek way. Nami’s story is a sorrowful tale of neglect leading to later inability to function in society. Even as her sister constantly tells her “normal is best”, Nami is set on a path of abnormality, seeking out similarly lonely individuals who have given up on society. She is lacking attention and emotional support from those around her. Loneliness is a huge social issue and this film does a great job of showing the reasons for it, but also offering hope that this is not a path that people are tied to. The finale of the film seems to be a rejection of the mindset that isolating yourself is the best option. It entertains as comedy and horror-comedy and leaves much of the thinking to the audience. For example themes of religion, in particular Christianity, consumer and media culture, and the rigid social norms of marriage and family are all there for viewers to unpick. However, you choose to enjoy it, as an off-beat black comedy, or social satire, it is definitely unique in both style and outlook.