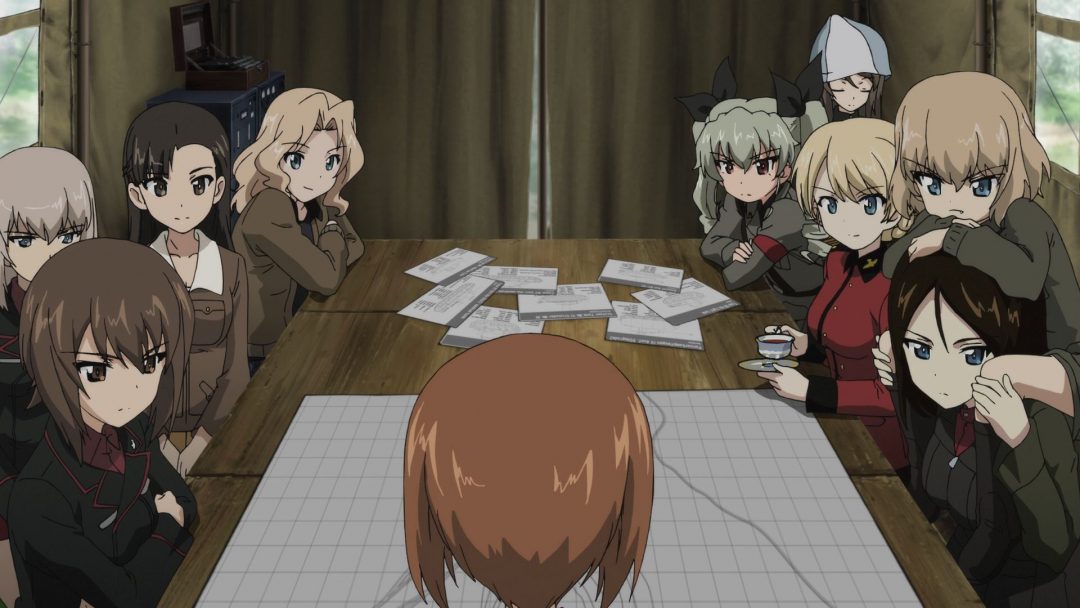 This film throws us straight into the action with a battle between Ooarai Girl’s School tank club and an international school. The story presupposes that you are familiar with the characters and the world, following on from the “Girls und Panzer” series. For those who are not, the film takes place in a world where there is such a thing as a school tank club, in which teams take command of tanks in large scale battles (as opposed to the usual sports clubs). Following this opening battle, the film’s plot kicks into gear when the girl’s school (which happens to be on a large carrier ship) is taken away. They manage to retain their tanks and organize a tournament against a University team, the prize of which is to be the saving of their school.

The film is directed by Tsutomu Mizushima from a screenplay by Reiko Yoshida, carrying on from the original series. It is a premise that is simple yet endlessly entertaining and the film gives fans exactly what they want. The battles which bookend the film are long and show a great deal of creativity. A historical supervisor was involved and it is interesting to see the large variety of different tanks and tactics discussed. The script is packed with fun dialogue, replete with historical references and meaningful quotations alongside the quirky, off-beat humour of a high-school comedy drama. The characters are all voiced by the original actors and do a great job with their characterisations. Although this film does not reintroduce characters, rather assuming foreknowledge of the show, there are many great moments that show the camaraderie and affection between them. The music by Shiro Hamaguchi is a mix of soft melodies for the character moments and a bombastic action soundtrack during the battles.

Absolutely worth a watch for fans of the series; the film has a heartwarming message about friendship and co-operation. It is a meaningful lesson for the characters that could be said of any school activity. The fact that it is tank warfare offers an unusual element to the typical school drama of overcoming adversity to save the school. The historical parallels are never drawn too starkly, but it is interesting to note Japan’s relationship with war, particularly the Second World War. Almost all political notions are stripped from the story and the tanks and flags are decontextualised. The underlying humanity of the characters shines through and the positive aspects are emphasised. Following the battles, the girls always respectfully thank their opponents and ideas of honour and respect play a large part. Alongside this, virtues of quick-thinking, strategy, boldness, compassion and more are played out on the battlegrounds.